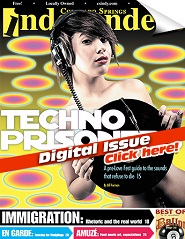 Little piece I did for the Colorado Springs Independent (csindy.com) on “the fragmented world of electronic dance subgenres.” The article coincides with the Love Festival happening there this coming Saturday, August 7 (thelovefestival.com). Brief overview of various taxonomic intricacies, such as house (“As close as electronica has come to producing its own recognizable soul music”), techno (“perhaps best understood as emphasizing tech over sex”), minimal techno (“emphasis on monotony as a tool to both Zen-state zone-outs and cathartic freak-outs”), glitch (“celebrates failure and error”), IDM (“Stands for ‘intelligent dance music,’ which doesn’t exactly make nice with all that other dance music”), dubstep (“takes a kind of taut, broken shuffle and makes it reverberate … into dark fantasy of urban mystery”), trance (“Relatively more melodic … ‘Melodic,’ that is, relative to dance music; we’re not talking the Beatles”)”, and electro (“If robots from the 1980s made hip-hop and aspired to be pop stars, this is what it would sound like”), with suggested key acts for each.

Also, a little bit of additional terminology, including my advice on how to best experience a rave-like setting: “Massive party with multiple electronic acts, generally held in large warehouse or outdoor area. Unlike at any other such festival-style event, the best situation arguably isn’t watching an individual act, but standing at some blissful Venn Diagram spot where multiple simultaneous performances overlap in one singular, chest-shaking sonic experience.”