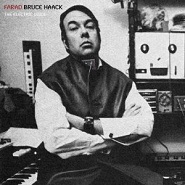 Like any great label, Stones Throw embraces its roots, celebrating them as an influence, incorporating them as samples (as is inherently the norm in hip-hop, the primary music at the label), and repackaging them for a new generation. A new album, Farad: The Electric Voice, collects vocoder tunes recorded in the decade following 1970 by music pioneer Bruce Haack, who passed away in 1988. The label has posted one of the album’s tracks, “Electric to Me Turn” (MP3), which sounds a bit like late-era Raymond Scott, or the loungey commercial-jingle work by Herb Pilhofer that Thes One remixed on his Lifestyle Marketing collection. Also for download, a Haack remix by Danimals, of the track “Incantation,” due out on forthcoming EP (MP3).

There isn’t a lot about Haack in Dave Tompkins’ recent How to Wreck a Nice Beach: The Vocoder from World War II to Hip-Hop, a richly illustrated compendium of the device’s uses over the eras. Tompkins notes Haack’s appearance on the kids show Mr. Rogers’ Neighborhood, and his early association with hip-hop producer Russell Simmons (on “Party Machine,” off the un-released album Haackula): “You can feel the heat of my computer beat.”

Tompkins mentions that at the time of Simmons’ work with Haack, the future hip-hop impresario was managing Kurtis Blow — who, a YouTube commenter mentions, is name-checked on “Party Machine.” Tompkins also makes the important connection between the Haack-Simmons collaboration and Simmon’s production of Jazzy Jay’s vocoder-rich 12″ “The Def Jam.” More info on Haack at stonesthrow.com.