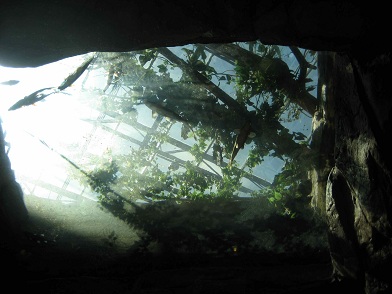 Justin Hardison records as My Fun, and posts sound-journal entries, generally without written comment, at his website, thelandofmyfun.org. That’s specifically written comment that these often brief sonic experiments and aural snapshots generally lack, because they’re routinely accompanied by a photograph, such as the one above.

The photo appears to show, from below, branches reaching up to a glass roof, the sun at its zenith. It may be a conservatory, or an abandoned building. Heck, it may be an abandoned conservatory. What it does do is provide an image that’s often referred to as a “bug’s eye view,” which is to say it goes well with the title of the associated sound-journal entry, “Low”:

The track is a beautiful drone, a mix of sonic vapor drift and undulating waveforms. It would be placid if those waves didn’t form so quickly, if their give and take didn’t take on a fervent vibrancy that makes them anything but ambient. Despite the appearance of gauze, they have a visceral impact on the inner ear, and raise the pulse rather than steady it. (I feel the need to make clear at this juncture that this description is intended as a compliment.) In a way, they are like an ambient cousin to dub music: dub often seems loungey, but its rich bass depths can feel vertiginous, and its massive echoing can be disorienting, disconcertingly so. Also, the texture of “Low” has a serrated aura, like cellophane with a sharp edge.

Hardison manages to push at the comfort zone of atmospheric electronic music, a genre that often lapses into peaceful sentiment without considering the despair that the sentiment masks — and he does so without resorting to the industrial touches that are the hallmarks of so-called “dark ambient.”