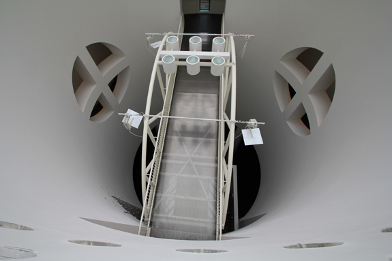 Balancing Act: Depiction of artist Bill Fontana’s Sonic Shadows installation in the bridge at the SFMOMA

In a recent one of its Artcasts, the San Francisco Museum of Modern Art interviewed sound installation artist Bill Fontana about the alchemy inherent in his work, and in particular the beauty of mechanical sound (MP3).

He discusses his use of the accelerometer in his piece “Sonic Shadows,” which he describes as a “kinetic acoustic wall drawing.” (There’s also an M4A version of the podcast, which includes embedded images.) The above photo is a still from a massive (114 MB) video document of the installation, available for download (MOV), and showing the set-up from a variety of angles. It opens with the question “What ambient sound does the museum generate?”

“Sonic Shadows” was commissioned by SFMOMA as part of its 75th anniversary. As the museum describes the piece: “This sound sculpture uses moving ultrasonic speakers and vibration sensors to transform the space below the dramatic circular skylight, surrounding the fifth-floor pedestrian bridge, into an acoustic drawing in real time. As visitors cross over the bridge, their footfalls contribute to real-time recordings of ambient sounds.”

Work such as Fontana’s seems especially appopriate for an anniversary of an institution, as it will be impressive to individuals who have spent significant periods of time in the building previously yet not been aware of this sonic aspect of the place.

Speakers installed in the ventilation holes above the bridge are paired with moving ultrasonic speakers below whose narrowly focused audio beams reflect off of the surrounding surfaces, creating what the artist describes as a transparent, acoustic wall drawing in which “the shapes of the architecture become sound.”As visitors cross the bridge their footsteps contribute to the live composition. Exploring the internal resonance of structural elements, the piece mixes real-time recordings of sounds produced by the bridge, the walls, and the pipes in the boiler room hidden behind the opposite wall. Whereas some of the artist’s past sound sculptures integrated recognizable sounds from nature or urban locations, this site-specific piece transforms more abstract, mechanical noises into an ever-changing dreamscape complemented by shifting patterns of sunlight and shadows. Fontana activates this transitional, non-gallery space, producing an immersive sensory experience of the museum itself.

There’s also video of Fontana working in the bowels of the museum at sfmoma.org, in which he discusses the influence on his work by Italian Futurists and their symphonies of industrial noise. 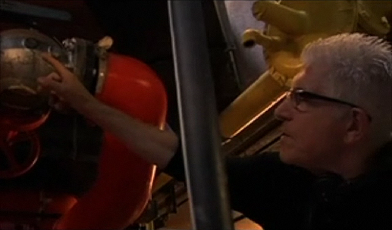 Future Present: An image of artist Bill Fontana in the boiler room of the San Francisco Museum of Modern Art