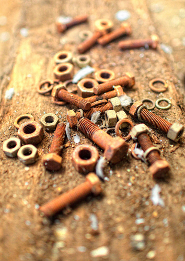 It’s unlikely that we will ever tire of backward masking. As post-feedback, post-reverb effects go, it’s old enough to have entered the realm of the natural, “the natural” defined as technology we consider part of (rather than apart from) everyday life. Though its very existence, the way it warps time, is about as unnatural as sound can get short of pure computer-reared synthesis, there’s something comfortable about it, perhaps owing to its use by George Harrison and others, perhaps simply due to its age in general. In the hands of Arvind Ganga, who records as Every Bolt Rumbling, it’s at first an entry into, and then a bed below, a percussive space.

Ganga does all this on guitar, which not only roots the sound in its perhaps most classic setting, but also doubles the sense of time-warping: he’s not only reversing the sound of his guitar, but taking us back in time. Judging by the evidence of this track, which is titled “Life as a Gaucho,” he may in fact be mixing two classic avant-garde techniques, because the crackling, light banging, and bent-wire twisting that slowly consumes the ethereal cush of the backward-masked guitar suggests that he has prepared it, perhaps with the bolts from which he takes his name.

More on Ganga, who is based in Den Haag, Netherlands, at twitter.com/everyboltrumbli (the above image is his Twitter avatar).