Update (2011.02.04): A second publicly accessible memorial Facebook page for Basiony features photos of him taken during the Cairo protests:

Battle of Cairo: What appear to be the late Ahmed Basiony (right photo) and presumably him (in mask) with unidentified friend during Cairo protests (photos from Facebook tribute page) 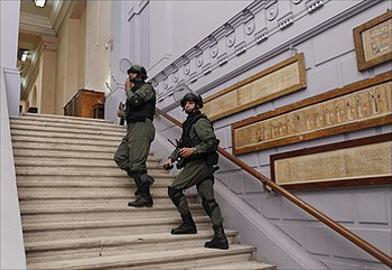 Art of War: Reportedly special forces in the Egyptian Museum (photo from washingtonpost.com)

Initial Post (2011.02.02): Word spread this morning that Egyptian artist and musician Ahmed Basiony died on January 25, the first day of major anti-government demonstrations in the current Egyptian uprising, reportedly of asphyxiation from tear gas. (Subsequently the date of his death has been reported as January 28.)

That’s according to his page on Facebook — and five full days after I’d admiringly, at twitter.com/disquiet, shared a link to a video of him performing live in 2009, utterly unaware that he was no longer with us. In a memorial to Basiony, the American sound artist John Kannenberg posted a 4’33” field recording made outside the Egyptian Museum in Cairo — even at the time of its recording, the street was, as the audio displays, a noisy, busy place. Of course, that is nothing compared to what Cairo at this moment, under siege, is like.

The 4’33” length is, of course, following the lead of John Cage’s famous “silent” piece, in which a musician sits at his or her instrument (a piano traditionally, but not always) for three movements whose combined length is three seconds over four and a half minutes. It’s widely understood that one of the key aims of Cage’s piece is for the listener to listen through the framed silence and hear the world beyond the performance. To listen to this pre-uprising recording from Cairo is to hear not only the cars, the talking, the random noises, but to struggle to locate the long-simmering outrage, the deeply sublimated discontent that eventually ruptured this past week, and in whose tumult many died, including Basiony.

Kannenberg writes of this piece:

The sound of the water fountain outside the main entrance of the national Egyptian Museum in Cairo; what the museum campus sounded like before the protests that began with the Day of Rage on January 25, 2011. At the moment of uploading this track, the area around the Egyptian Museum has become a battleground between anti-government protestors and pro-government intimidators in the employ of the police. Dedicated to the memory of Ahmed Basiony, Egyptian sound and media artist who died on that first day of protests, a victim of police brutality.

This Egyptian Museum recording of 4’33” serves as a postscript to Kannenberg’s collection of 11 museum field recordings from last year, Audio Tour, released on his netlabel, stasisfield.com. There were two Egypt tracks on that release (MP3, “Internet Archive Backup Server, Bibliotheca Alexandrina, Alexandria, Egypt – May 10, 2010”; MP3, “Open Air Museum, Memphis, Egypt – May 4, 2010”), which I wrote about at the time of its release. The album was among my favorite free downloads of 2010. The collection includes 4’33” recordings from, among other spots, the San Francisco Museum of Modern Art, the Art Institute of Chicago, the Tate Modern (London), and two music-specific entries: the Motown Museum (in Detroit) and the Rock and Roll Hall of Fame and Museum (in Cleveland). It’s interesting to note that each of the 11 tracks on Kannenberg’s Audio Tour are not only the same length (4’33”, naturally), but also the same size — that despite the variation in complexity, they all fill roughly the same amount of hard-drive space.

It’s no doubt something of a pipe dream among those of us who enjoy field recordings, but should the act of recording the sound of a place ever become nearly as popular and common as is taking photographs of places, it’s imaginable that 4’33” would become a if not the standard length of such an audio document, the same way that there are standardized dimensions for photos.

The top Google link for a search for Ahmed Basiony leads to a page at 100copies.com/ahmedbasiony, the music organization led by his fellow Egyptian experimentalist Mahmoud Refat. The site has been offline since the start of the uprising. One hopes it will soon again be publicly accessible, and that, as if anything good could come of such a tragedy (beyond, of course, sweeping and solid governmental reform), the late Basiony’s work will gain a wider audience.

(Photo of Egyptian Museum steps by Tara Todras-whitehil, from coverage at washingtonpost.com. The caption reads: “On guard: Special forces officers patrol the Egyptian Museum in Cairo two days after would-be looters broke in and damaged about 75 objects.”)