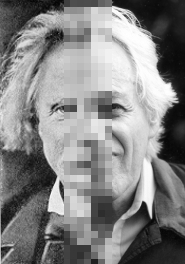 Alan Morse Davies has discerned that if you slow down Grieg it turns into Ligeti. That’s not how he characterizes it, but the melodrama of a Grieg original, once stretched to the point of fracturing, comes to resemble one of Ligeti’s haunting, offworld, spectral fantasies. Davies, for one of his long-running series of slowed-music pieces, used Grieg’s “Nocturne” as the source material. He describes his approach in brief: “It’s a serious mangling /mauling of Grieg’s ‘Nocturne’ from two different 78 records from the 1920s. I wanted to create a disquieting sense of ‘otherness.'” The past year has seen a slew of slowed-down music, from the Inception cues and app, to the angelic Justin Bieber post on Soundcloud, to the 10th anniversary of the death of molasses-remixer DJ Screw (see DJ/rupture’s appreciation). Just this morning a friend introduced me to the wonders of a slowed down Jurassic Park theme. A lot of this work has been as simple as using a preset piece of software, but it has clearly resonated with the general public (the Jurassic Park slomix has accumulated over half a million listens in less than 20 days). Here’s to hoping those listeners will make their way to composers, such as Davies, for whom slowing down has been an ongoing artistic pursuit. And do note that Davies employed two different source copies, the mix of which, not to mention their surface noise, contributed no doubt to the shadowy pleasures of what resulted. He titled it “Cubic Sentient Ballroom” (MP3). Which is to say, if you slow down Grieg you do, indeed, accomplish something that resembles Ligeti — but what you truly get is Alan Morse Davies.