Two instrument-making musicians, one evening, two very different approaches. Last Thursday, January 27, the Luggage Store Gallery New Music Series hosted two Northern California musicians: Jaroba and Sung Kim. Jaroba (aka James Robert Barnes) was due to perform with Keith Cary. It was disappointing that Cary couldn’t make the show, because he’s quite accomplished — for example, he built the reproductions of famed futurist Luigi Russolo’s intonarumori horns (circa 1920) for performances held at the end of 2009 in San Francisco and Manhattan (I caught the San Francisco show, which happened at the Yerba Buena Center downtown).

Jaroba adapted well to the change in plans, and played a variety of things, including a saxophone with a thick long tube situated between horn and mouthpiece. The extension rendered the music with a rich reverby hum. For another piece, he played an instrument that connected his sax mouthpiece to a long irrigation tube, which then fed the sound through the speaker cone of a PA, resulting a deep fluttery noise. He credited Cary with much of the device’s creation, explaining it originally employed a tuba mouthpiece. He also described a tone generator built from a stationary bicycle, but that object wasn’t present at the Luggage Store show. 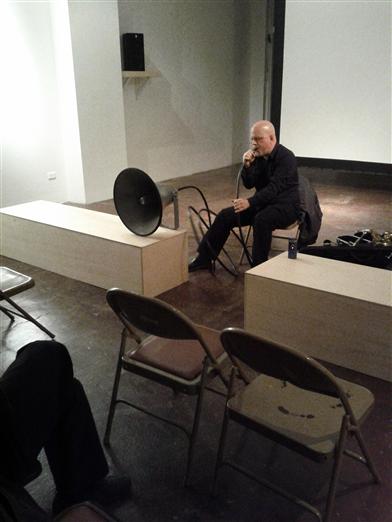 Sung Kim’s instruments were as complicated as Jaroba’s were simple. They included a bowed one made from wood with an animal-hide (deer, if I heard correctly) body with 24 strings, a plucked one that looked like a bass sitar merged with Wolverine’s adamantium spine (16 strings), and a wooden box with oscillators that emitted a mix of pinging bleeps and droning, resonating strings. There was also an incredibly simple guitar, like bass banjo, with just three strings, its oversize tuning pegs like buckteeth. 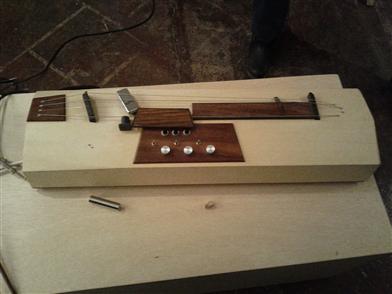 Axeman Cometh: The most complicated (above) and simple of Kim’s works 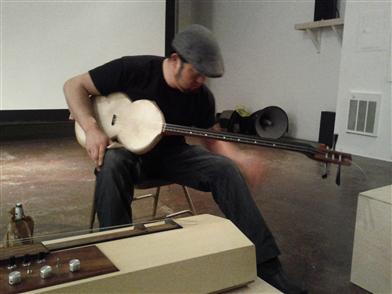 Both Jaroba and Kim are exemplary players of their instruments. Kim in particular seemed to take the opportunity to express all manner of techniques possible in his creations, banging on the hide of one of them, bending the neck of another. 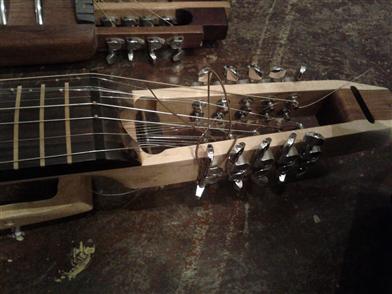 String Theory: Note the dense spaghetti bowl of strings at the end of these two of Kim’s instruments. 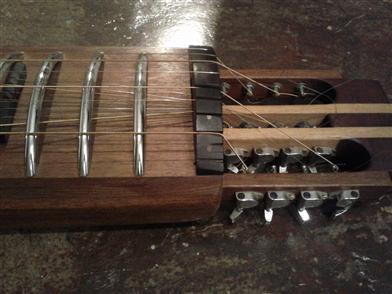 Fortunately, a video most of his performance has been uploaded: