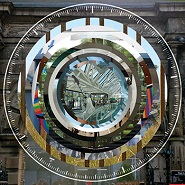 John Kannenberg visited 11 of the world’s best-known museums, and all we got was 11 blank tapes. Well, not really — what we get is recordings of silence, each 4’33” in length. That’s silence with an implied capital S, silence as in John Cage’s framing of unacknowledged sound, the background noise of real life. Each track — from the Art Institute of Chicago’s Modern Wing (MP3) to the Van Gogh Museum in the Amsterdam (MP3) — contains 4’33” of uninterrupted, unedited semi-silence (“unmanipulated phonography,” as the liner note puts it). And with a sly nod, the collection ends at that bastion of popular noise, the Rock and Roll Hall of Fame (MP3).

The recordings are, of course, anything but silent. Most are packed with talking and footsteps, while the Rock and Roll Hall of Fame features a fair amount of CSNY.

Get the full set at stasisfield.com.