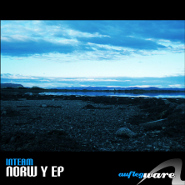 For all the invigorating monotony and sound-design immersion of techno, the best moments in a given track often occur at the opening instant. That suggestion isn’t to disregard the rapturous glories of Zen stasis and of tectonic-shift micro-development inherent in the best techo. But that opening moment of a track is when a crevice opens, and vapor trails of what might yet happen waft up. Soon enough the beat kicks in and it’s more or less easy to extrapolate what’s to come, but for that moment it’s generally a small array of noises that are yet to settle into an organized whole. If music is organized sound, then for that moment, it’s still sound. (Making such a distinction has gotten me into trouble in the past, so perhaps paraphrasing Edgard VarÃ¨se will inoculate me.) The great title track off Norw Y by Inteam (aka Zwickau, Germany’s Florian Willuhn) is no exception (MP3). Enticing bits of pin-drop percussion and pneumatic pulsing soon give way to a dubby holding pattern. What follows, though, turns out to be more diverse than much techo; it’s a veritable suite, especially when what seems to be a taut snatch of accordion appears midway. Willuhn manages to introduce such surprises throughout, and each time the introduction of a new sound reinvigorates the track, as if it’s starting anew. For a moment, it’s just sound — strange, enticing sound — and then, an instant later, it’s formalized into music.

There are four tracks in all on Norw Y, available for free from the auflegware.de netlabel.

One thought on “A Techno Suite (MP3)”