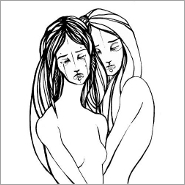 Unlike much supposed and purported dream pop, the songs of Love Cult are truly more ethereal than they are song-like, which is to say: they’re more dreamy than they are poppy. As represented on a three-track set, Live in Saransk, the compositions come across as fragments of memories of songs. Less like sketches of songs to be than memories of songs that were. There’s a bit of a melody, for example, to “Reflection,” a downward-sloping riff that repeats like a half-conscious shard of childhood (MP3), a comparison buttressed by the thick haze through which it is filtered, as well as by the occasional appearance of what sounds like the voices of little kids. It’s a ghost image of a song, flashed on the mind’s retina and lingering seemingly forever. “Fireflower Language” is sodden muffle, and all the more memorable for it, like a chorus played on a damp cassette; stretching on for 15 minutes, it’s a secular mass as envisioned and then neglected by Angelo Badalamenti (MP3). And a collaboration with Bedroom Bear on an untitled ten-minute wash of synthesizer suggests the opening chordal swell of a pop song that never quite arrives (MP3). Given apparent visa issues keeping the Love Cult duo of Ivan Afanasyev and Anya Kuts from performing outside Russia (they hail from the Republic of Karelia), it’s enough to make you set a hopeful Google Alert for reasonably priced airfare to Petrozavodsk.

More information on the release at pandafuzz.com, and on the Love Cult duo at lovecult.tihiiomut.ru. Bedroom Bear, also based in Karelia, at bedroombear.tumblr.com.