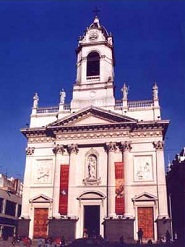 The church has long since ceded its role as the major commissioner of music. Music that explores the church as physical structure or cultural apparatus, whether consciously or not on the part of the musicians involved, inherently concerns itself with the means by which the institution shaped sound. In the work of Luis Marte, that shaping is enacted literally and metaphorically. While the details are uncertain, Marte’s “Templos” appears to take the space and ritual of an Argentinean church as its setting and subject. In a brief liner note at the estimable cronicaelectronica.org website, whose CrÃ³nicaster podcast distributed the “Templos” audio, Marte mixed video art, vocals, and electronically mediated sound in the work (MP3).

The place where this all occurred is a church in San José de Flores (pictured here), and the piece, opening with distant footsteps muffled by harsh if quiet noise, suggests a haunted environment. Out of this noise comes two rich female voices, belonging to Ana Larrategui and Roberta della Monica, and they are echoed to suggest a larger number of singers, though whether that doubling is the result of Marte’s processing or the church’s echo-enhancing structure is unclear. They appear about halfway through the 14-minute piece, set against a suddenly diminished background track, the haunting audio reduced to a sound bed.

(Photo of the Basilica of San José de Flores courtesy of wikipedia.org.)