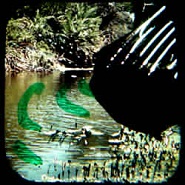 Not all European free improvised music is European. Some is Canadian. Take the Saskatchewan-based efforts of Isak Goldschneider, Amy Horvey, and Jeff Morton, as captured on their recent free release, Mille Bayous. That’s “free” both ways: downloadable and improvised. The list of instruments involved hints at the potential cacophony, but not at the near stasis that the trio revels in for much of the recording: Horvey, “trumpet, water, bowl, contact microphone, piano, percussion”; Goldschneider, “clarinet, electric organ, motor-magnet guitar, piano, percussion”; Morton, “microphones, percussion, brass objects, motor-magnet guitar, electric organ, piano.” Cacophony does rear is carnival-esque head, on the closing “Les Méfaits de l’arbre,” at the end of which Horvey is heard to say, “Oh, whatever.” But the placement and the candid comment suggest it as an outtake, a blooper-real snippet, the noise against which the rest of the album’s intense quietude can be judged.

Instead, gauge the musicians’ fierce simpatico from the earthen textures of “Scary Forest,” in which breathy, salivating woodwind lends a backdrop to light metallic gestural figurations (MP3), or the opening track, “Introduction: Creole Rhizome,” with its mix of brittle drone and kazoo-like effervescence (MP3), or “Bop Hunters,” in which nanoscale sawing plays against a rattly mechanism (MP3). It’s tempting to read the album’s title as a rural response to the Mille Plateaux aesthetic, a (mostly) analog microsonic counterpoint to the once ubiquitous digital ephemeralism.