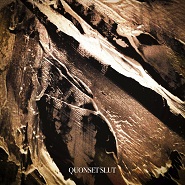 The drones are dense and complex, but they don’t stray too far into abstraction. Every once in a while, the slap of a hard body is heard, or the familiar roar of string-based feedback, or even the tactile whine of a finger making its way up a striated, sinewy bit of metallic cable. This is guitar-based drone music that ebbs deep into the bass spectrum. It’s by Quonset Slut, the name that Ted James Butler takes on when he’s exploring this sonic territory. The four tracks on the Slut’s self-titled album sound at times like that bridge-like moment in a song by Metallica or Black Sabbath, or even Neil Young, just before all hell breaks loose, except it never does; it just lingers in a limbo that is all the more unsettling. Get the full set for free as a Zip file at distancerecordings.com. More on Butler/Quonset at quonsetdigital.us.