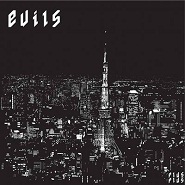 The dreamy folk of Evils, by Plusplus, takes a strange turn on “Swimmer,” the seventh of the album’s eleven tracks. What had been all closely mic’d guitar, with rare but welcome dips into odd verbal intrusions, opens with artful drear, a blur of not so idle static, a machine getting its engines in gear on a cold night. The acoustic guitar seeps in, eventually taking the central spot to which it has become accustomed on this collection, but that opening threat remains (MP3). It is heard as Roches-style hushed glossolalia harmonizing, albeit buried deep in the mix and channeling a cicada-like buzz. It’s heard as a very light, Theremin-ish whizzing. Plusplus are part of folk’s velvet electronic revolution. This is music that challenges various notions of folk, notably the one that hears folk as an entrenched, pre-digital realm.

Get the release, which came out March 21, for free at labelnetlabel.com.