In the narrower sense, what distinguishes the drone is just that: all drones are not created equal, and the subtle shadings are part of their compositional nature. What makes drones especially rich, and extends their generally non-confrontational affect, is that new drones illuminate old ones. Drones don’t participate in a war of attrition. New drones don’t update and outdo old drones. New drones shed light on the workings of earlier drones. Drones may all sound vaguely the same when heard separately, but close proximity makes it clear just how distinct they all are from each other. 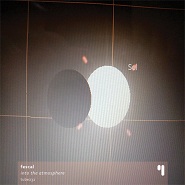 What distinguishes the drones of South Korea”“based musician Fescal, at least as heard on Into the Atmosphere, the recent release on the Portugal-based netlabel test tube, is an emphasis on texture, an active engagement with texture. There’s nothing here that hints back at the MIDI and synth era of rhapsodic ambient lounge music. Feedback breaks in on “Yesterday’s News” the way a light glints on a camera lens, and that’s after an extended passage that is downright gritty — not film-noir stage-set gritty, but urban wasteland gritty, live-field-recording gritty (MP3). On “The Way the Cookie Crumbles,” a haunting, sublimated vocal chorus — haunting not just because of how buried it is in the mix, but also because of its static, inhuman quality — provides the sort of complex overtones that perhaps only vocals can bring (MP3). These are trenchant drones. On “Lucky Man,” the texture goes meta, as if we’re not so much listening to the drone, but to some recording of the drone that has then, wholly, been put through a post-production ringer (MP3).