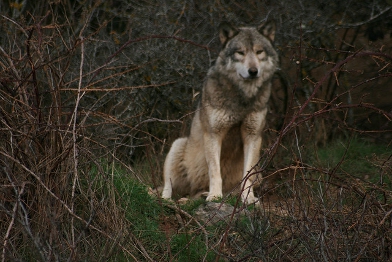 Yannick Dauby often employs field recordings in his compositions, as is the case with his recent contribution to the Touch Radio podcast series. “Arches” is the title he gives to the piece, which has as its foundation the songs and barks of wolves in a French sanctuary in the LozÃ¨re region of France (MP3). Writes Dauby of the wolves, which he recorded in February of last year, “The barks are often associated with aggressive behaviours, meanwhile the chantings are a way to reinforce the cohesion of the group and calm down the tensions.” The piece’s title, “Arches,” comes, apparently, from Dauby’s impression of the wolves’ songs: “Those arch-shaped tones,” he says, “are amongst the most beautiful things one can hear from the animal kingdom.”

Those songs and barks emerge from the haze of Dauby’s production much as they would from the mists of the forest, and he also appears to use those “tones” as the building blocks of some of quasi-melodic material in “Arches.” One note: peculiarly, the Touch Radio description text makes no clear statement about Dauby’s process, aside from clarifying when the field recordings were made and when the “composition” was produced. A casual reader could imagine that this is, in fact, a documentary recording, not a post-production construction.

Piece originally posted at touchradio.org.uk. More info on Dauby at kalerne.net. Above image of a LozÃ¨re wolf via Creative Commons from the flickr.com account of a user who goes by the name D’Aragorn. Further images at davemech.com, the website of the scientist who introduced Dauby to the wolves of LozÃ¨re.