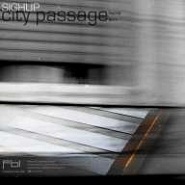 The ambient subgenres of pre-existing genres is where the music often makes its most valuable contributions. In the hands of folks like the Boxhead Ensemble and the solo work of Boxhead member Scott Tuma, we get country music without the songs, in which rural sentiments are summoned up as mood, not stories. In the hands of people like Ben Neill and Grassy Knoll, we can get tastes of jazz without the riffs, in which improvisation is about tone and texture. In the hands of Eivind Aarset, we get fusion without the noodling, all about the jazz inherent in electricity.

And in the hands of folks like Sighup, aka Steve Hamann, we get industrial music without the production-line rigor, left instead with the sort of power-plant ambience that’s heard in “City Import,” the opening cut on his recent three-song collection City Passage (MP3). It’s not pure haze, not the imagined ambience that is entirely made up of ethereal layers — and, more to the point, entirely made up; the absence of vestiges of the physical is one of the most unnecessary norms in ambient music, one that Hamann is more than happy to disregard. “City Import” has weight and movement, like that of wires scraping against each other in a thin breeze. It’s the power plant after hours, when the crew has gone home. There’s no Disney/Pixar fantasia about the machinery coming alive, just the everyday noises of machines after dark. And just because the track doesn’t meander into anthropomorphism doesn’t mean it’s un-affectionate. This is Information Age industrial music, in which the sheer physicality of machines is enough to distinguish them from the near-friction-less gadgetry that has become the everyday norm, and to make them objects of fascination.

Get the full collection of three tracks for free download at archive.org. More details at the releasing netlabel, feedbacklooplabel.blogspot.com.

More on Sighup/Hamann, who is based in Toronto, at soundcloud.com/sighup, twitter.com/steve_hamann, and sighup.ca. In the past, I’ve referred to this kind of non-metronomic industrial music as “industrial industrial” music.