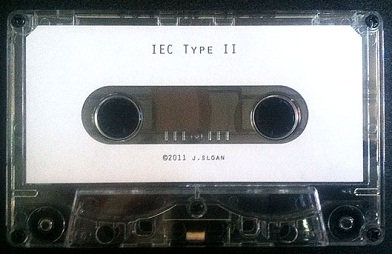 When Jason Sloan ponders minimalism alongside noise, he observes similar concerns. To some listeners, the comparisons that Sloan pursues will seem off, for isn’t noise a maximalist approach, rather than a minimalist one? Doesn’t noise blot out rather than subdue? Doesn’t it exhibit contrasts through force rather than through subtlety? Perhaps, but just as likely, in fact more than likely — for I, at least, tend to agree with Sloan — noise is simply minimalism with the volume turned up.

To investigate the concept of noise and its discontents, Sloan has begun a series of sonic art projects, each of which, he proposes, will, in his words, “recycle a particular medium’s inherent, undesirable sonic traits.” He lists among the examples radio static and digital music compression. First, though, comes the hiss of a tape cassette, which is especially timely given the cassette tape’s popular resurgence. The work, in an edition of nine, presents three quarters of an hour of tape hiss (MP3) on each side of a cassette, as pictured above and heard below, in 15-minute excerpt:

In describing his thinking, Sloan writes, in part:

Recently, I’ve been thinking a lot about the general understanding of noise. Most people would consider it a distrubance to an otherwise desired experience. Static during a weak radio or television transmission or a child crying during a church sermon could be seen as anomalies that “ruin”the expected outcome of an otherwise desired event. Over the years we’ve attempted to purify these experiences with technologies that attempt to filter the noise from our lives

The issue almost certainly is about interruption, or what Sloan terms “disturbance.” The white noise heard here would be the rush of a river were one in a lovely cabin in the woods, or the whir of wind were one speeding along a highway toward a vacation destination. Were the sound to suffocate the intended listening on a tape, it would indeed be noise. But on its own, as the pure content of the tape, it is minimalist, simple in concept and in execution, as white as one of the Robert Rauschenberg paintings that Sloan cites as inspiration.