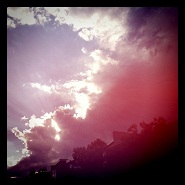 There’s a tension at the heart of “Good Evening, Ghosts,” a recent track made available for free download by Carl Ritger, who is based in Boulder, Colorado (formerly Philadelphia, Pennsylvania), and who records and performs under the name Radere. On the one hand, the piece provides a truly blissful expanse, a quavering mass that, while not without texture (it sounds at times like a microphone or speaker has purposefully peaked out), has both the glacial pacing and the soft contours of a slow-moving cloud. (The cloud comparison would have come to mind even if Ritger hadn’t paired the track with an Instagram-ified vision of the sky.)

On the other hand, there is the way that cloud-like mass proceeds. It’s heard as a brief loop of gauze, but it repeats with an urgency that’s in strict contrast with its sonic material. That contrast is what makes the track initially arresting, what provides its tension, what makes it more than another swath of ease: it is both soft as could be, and yet relentless in its trajectory. In time, the cloud wins, the edges of the loop slowly blur, but it takes nearly a quarter of an hour for that to occur — almost as much as for a cloud to cross the sky on a summer afternoon.