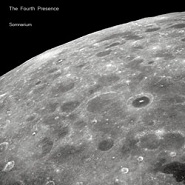 There are many types of drones. When we speak of drones, even just the drones that fall under the broad rubric of electronica or electronic music, we can be speaking of many things, all of them quite different from one another. There are high-pitched squeals that seem to have dogs as their intended audience and that often speak to anxiety about technological creep. There are ambiguous swaths of field recordings that seek the underlying sonic narratives in everyday life. There are thin wisps closer to ether, soft sounds that speak of the alignment of spirits and electricity. These are among the many things that purveyors of drones and connoisseurs of drones call drones. And then there are the drones that the general public would recognize as drones: the thick, dirge-like, extended instances of ear-rumbling tone. Such is “Wretched Seed,” the penultimate track off Somnarium‘s recent release, The Fourth Presence, on the Dark Winter netlabel (darkwinter.com).

It’s a slow-moving mass of deathly solemnity — and, for those not privy to the tastes of drone-listeners, that’s a high compliment. It sounds as if video artist Douglas Gordon had taken the opening moments of the original Star Wars film, when the cruiser moves past overhead, and slowed them to the precise length necessary for the newly attenuated audio — stretched like taffy, but all the darker for the effort — to serve as a backing score for a dramatic reading of Stanislaw Lem’s novel Solaris (MP3). Such is the intensity of Somnarium (aka Australian Michael Meara).

Get the full release for free download, six tracks total, at darkwinter.com. More on Somnarium/Meara at sonicjourney.com.