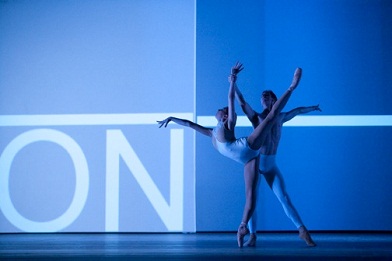 “Hermes” is a track by Scanner, aka Robin Rimbaud, the prolific British musician and sound artist. It is an excerpt of one of his recent ballet scores, in this case a work he created with choreographer David Dawson of the Dutch National Ballet.

“Hermes” is an excerpt, an alternate mix, of what the Dutch National performed to. The full work is titled timelapse/(Mnemosyne), and for a glimpse at what these sounds are intended to align with, there is a short video on youtube.com:

Scanner retains a vestige of classical ballet by insinuating a violin section into the mix. It’s a natural connection, and brings to mind not only the scores of the core ballet repertoire, but, as the electronic percussion kicks in, precedent “crossover” work like Malcom McLaren’s “Madame Butterfly.” But where McLaren sought contrast between opera and dance music, Scanner has the benefit of working in two dance mediums at once: ballet and, for lack of a more nuanced term, techno. This isn’t merely a matter of correlative genre associations. It’s intrinsic in the music. The “Hermes” track works because while it opens in strict contrast (strings versus beats), in time the sense of contrast dissipates — those violins do not change much as the track proceeds, but as they meld with the electronic percussion they reveal themselves as a kind of percussion, a percussion of strings. The contrast doesn’t merely dissolve. It reveals itself as having been an illusion from the start.