The Sonic Trajectories of Birds (MP3) 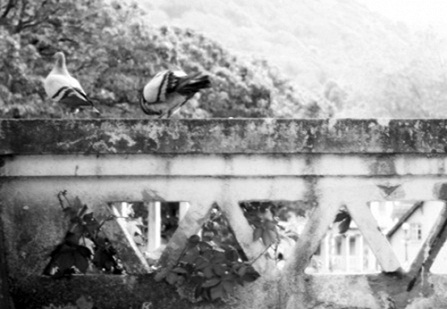 It’s enough to test the quality of your laptop’s speakers — not their ability to withstand sonic assault, but, quite the contrary, their ability to make quiet noises discernible. What seems to be the wheezing of a broken circuit on an external speaker becomes a self-contained sound world under the influence of headphones, the audio turned inside out, viewed from inside rather than heard from a distance.

The sounds that comprise “Quem Conta Um Conto, II” by Sara Pinheiro are fragile, indeed, bits of far-off activity, and the closer apparition of birds. The above image accompanies the file on the website it first appeared, the great Chicago-based podcast at theradius.tumblr.com, but even without its assistance, there’s no doubt that the shuffling and cooing would be mistaken for anything other than what it is. There is fluttering, too, so for every bird heard close by, there is the sense of one further off.

How those sounds and the non-avian ones correlate is what Pinheiro is after. She has quite the ambition for her subjects (stating in an accompanying text that the noises follow “film theorist Chris Vogler’s twelve stages of the Hero’s Journey”), but the audio itself remains, blessedly, modest: small scrapings that in their relative abstraction still manage to push the imagination toward the sense of a scene, of things coming and going, and of the causes and impact of such motions.

Track originally posted at theradius.tumblr.com, where it is episode number 14 (also at soundcloud.com). More on Pinheiro at sarapinheiro.com. She is originally from Portgual and has, as of last year, been pursuing a masters degree in sonology at the Royal Conservatory of Music – The Hague (The Netherlands).