Ted Linus Farber‘s “Let Old Blue Sing His Song” is part of a group exhibit currently on view at the library at Sonoma State University. 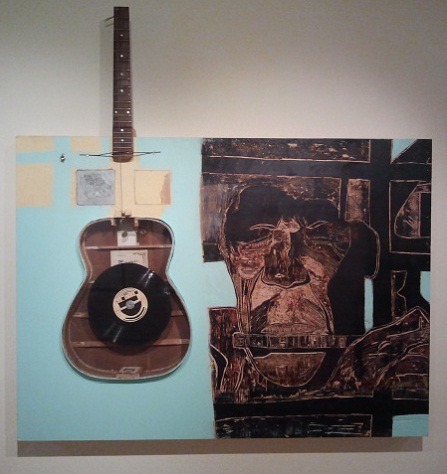 The works in the exhibit, which is titled Metamorphosis, broadly draw from a theme of biological process. Farber’s piece is a large-format construction: part painting, part collage, part installation, part sculpture. A record album, albeit without a turntable needle to give it voice, rests inside the outline of an acoustic guitar, which itself sits alongside the rough structure of what appears to be an old man’s face. Presumably the horizontal slash across the face is a harmonica — as the work’s title suggests, the blues is its subject — though at the close range of the depiction, it also resembles the neck of the guitar. Covering his mouth as it does, it suggests muteness, a reading that aligns with the music-less vinyl record. The guitar neck extends above the album like a weather vane or an antenna — receiving a signal rather than projecting one.

There’s a little switch to the left of the guitar neck, a somewhat ironic detail given that the guitar is an acoustic one, not an electric one. (You might miss it if you don’t look at the wall text, which lists the work’s constituent materials as: “woodcut, painting, electronics.”) When switched on, the vinyl album spins, but there is no music, just the slightly grating mechanism that makes the LP turn. There’s a tension worth pondering about the placement of the record at the center of the guitar, as if the turntable were the heart — perhaps merely, at this stage of history, the pacemaker — keeping the guitar alive. The vinyl record can’t contain Old Blue’s song, which goes nameless. The rumble of that rotating mechanism serves as a requiem for a variety of fading technologies.