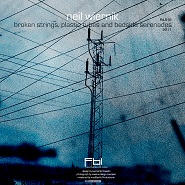 These may be the least drone-like drones in recent memory — or, perhaps more to the point, the most drone-like melodies in recent memory. Certainly the music on Neil Wiernik‘s Broken Strings, Plastic Tubes and Bedside Serenades has the thick slow-motion ooze of the best down-spectrum haze, of the most bass-veering ambient music: dense figurations that hover just above the ground, more Tule fog than cumulous cloud. “Sunshine White Out Sequence No 207” in particular brings to mind the submerged pianism of Harold Budd at his least treacly (MP3). But there’s more here than just haze for haze’s sake, not that there’s anything wrong with purist sound design unto itself. (The contrast between “pure” sound design and “purist” is intentional: the word “pure” might mistakenly suggest that the optimal sound design is the ethereal music-of-the-spheres HVAC/distant-traffic/circulatory-system drone, while “purist” seems to embrace that idea more explicitly.) Instead, perhaps preeminently on “Endangered Species List No 387,” there’s a sense of sinuous threads of developing sonic and melodic content being given just enough energy to progress but not so much that they move into the foreground (MP3).

Get the full release at archive.org. More details at the releasing netlabel, feedbacklooplabel.blogspot.com. More on Neil Wiernik, who is based in Toronto, at phoniq.net.