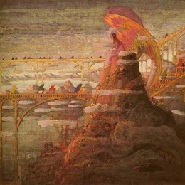 When the MoCA, in Los Angeles, and the Hirshhorn, in Washington, D.C., combined forces in 2005 to produce the exhibit Visual Music, one of the key precedents it cited for audio-visual synaesthetic engagement was the work of Lithuanian composer and painter Mikalojus Konstantinas ÄŒiurlionis (1875-1911). The sound artist Gintas K created a tribute to the composer during a residency in the composer’s one-time home in the city of Druskininkai. It takes the form of a rough assemblage of noises, of moving throughout the house, and what may be recordings of his works echoing in its halls, slowly gaining volume and intensity. There is, of course, the suggestion of ghostly apparation, but what’s especially intriguing is that echoing, the room tones of a place where a composer spent much of his time (MP3). As a kind of sonic stress test of that space, the piece is a map of the environment that no doubt helped give shape to the composer’s music. The work was performed in late August of this year at the ÄŒiurlionis Memorial Museum.