Sonic Nostalgia from the Man Behind Rothko Everywhere (MP3) 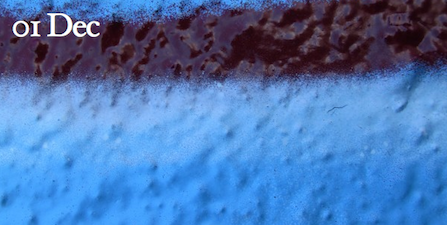 Ambienteer, aka James Fahy, sums up what he’s up to as well as anyone might aspire to: “Another experiment scanning the shortwave bands,” he writes of a recent track (MP3). He continues: “Seeking out some odd melodic interlude and once captured, adding reverb and a few other effects and tricks to transform it into a sleepy, filtered soundscape.” He’s describing “A Song From 7.30 MHz.” The song is a brief escape into ethereal nostalgia that he recently posted on his website, ambienteer.com.

His description doesn’t end there. The soundscape, he explains, is intended to be “reminiscent of the imperfect signal, bandwidth and output of my little 1970”²s transistor radio.” In other words, the sounds he was seeking out, as he puts it, were intended to begin with to be tweaked, transformed. So he wasn’t so much seeking out an odd melodic interlude as he was a specific sort of odd melodic interlude that would allow him to contort it into this depiction of his aural past. Which means as he was scanning the airwaves, his imagination was already performing a kind of mental filter on what he was hearing. Having located and captured that sound, he then warped it to his desired end. The result is a refreshing wash of sound, neither maudlin nor treacly.

It’s worth noting that Fahy is also the creator of the excellent website rothkoeverywhere.com, where everyday images — of roadsides, threadbare walls, and rust-stained concrete — are shown to resemble the swaths of contrasting colors that comprised the most famous works of painter Mark Rothko. (The one shown up top is titled “French Graffiti II.”) Fahy’s Rothko site is subtitled “The joy of finding his work hidden in the everyday world,” a phrase that could just as well apply to Fahy’s sonic efforts.

Track originally posted for free download and streaming at ambienteer.com. More from Fahy as well at twitter.com/ambienteer.