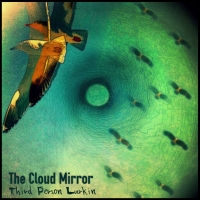 The wind chime is not the most likely percussive instrument in a hip-hop track — nor a likely melodic component, for that matter. It is slight, and prone to inaccuracy, and has all the swagger of a mid-nap pixie-dust sprite. But in the hands of Third Person Lurkin, a characteristically old-school member of the roster at the Bulgarian netlabel Dusted Wax, the chime serves multiple purposes. (It also, truth be told, may be a tiny bell and not a chime, but the effect is the same.) It initially appears in the track “Over Forgotten Places,” off the Cloud Mirror album, as an accent, one sound among many. Even when it initially repeats, it seems more like a flourish than a building block. But as the track proceeds, that’s exactly what it is: the key enabler of swing in the track, a swing that’s as fragile as a dust-laden cobweb in an afternoon breeze, but a swing nonetheless (MP3). In its own way, it is just as much a sonic irritant as once were the sirens that bled through Bomb Squad productions for Public Enemy, but here it’s an irritant along the lines of near-subaural “mosquito” tones that are used to shoo teens from convenience stores.

Get the full album for free download at dustedwax.org; there’s some beautiful echoed horn in the track “Sun Domes.” More from Third Person Lurkin, who’s based in England, at thirdpersonlurkin.bandcamp.com.