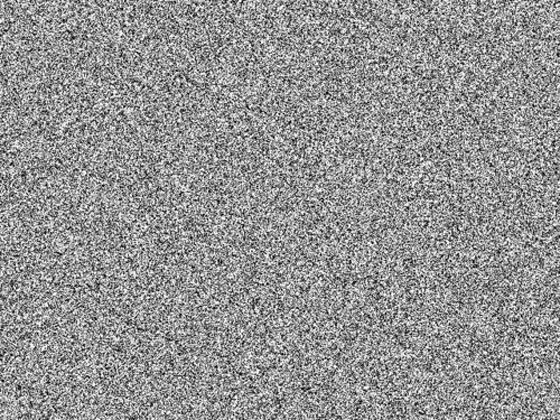 The track’s waveform is a long dark band of singularly rectangular dimensions. The top and bottom of the wave seem perfectly horizontal. If you blow it up in your browser, it looks like the cityscape from the video game Canabalt as seen in its entirety from across a vast distance. The track is titled “Distant,” and it’s by Damon Loren Baker, who in the work is exploring various aspects of white noise (hence the image, reproduced above, that accompanies the track on the website of Radius, the great podcast that distributed it).

From Baker’s description, the white noise that “Distant” appears to consist of isn’t in fact the original recording itself, but the effect of that recording when broadcast. Here is his description in detail:

Distant consists of white noise and sine waves that are beyond the range of most adults’ hearing. They are arranged carefully in chosen phrase relationships amongst signals that are completely inaudible and have no apparent effect on the final sound. However, when broadcast using a radio transmitter (ideally a low power one, the lower fidelity and power the better) those phrase relationships become mangled by the interaction of the broadcast with the environment it fills and activates. When the listener is too close to the signal, the subtleties between the phrase relationships are lost. When too far, the subtleties become inaudible. However, when somewhere between near and far, the garbling of the transmission creates pulses and tones from the creative and destructive interference caused by the reflected signal and the collapse of the stereo image.Â  The entire distant range of the broadcast radius becomes an instrument or an organism. Distant is the breath that brings this organism to life; the act of tuning in and listening to the piece forms it into sound.

Track originally posted for free download and streaming at soundcloud.com/radius-8 and theradius.tumblr.com. More from Baker at twitter.com/damonlorenbaker.