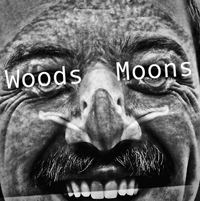 More than anything, some of the stronger tracks on Enko‘s Woods Moons, those earlier in the 14-track set, bring to mind the off-kilter rhythms of the band Battles at its most approachable, situations in which rock’n’roll is reduced to a shuddering husk, less feral than high-strung, less angry than anxious — and also situations that are enduringly electronic, whether inherently or associatively, with a rich dependence on automation’s rigorous verve and industrial’s manic momentum. The parallel is somewhat confusing, since Woods Moons appears to be the work of an individual, not a band — which is to say, if Battles was a band imitating broken machines, then Enko appears to be an individual using a machine to resemble such a band. Nonetheless, however it was recorded, the mix of jerky percussion and striated guitar on “Stouk” (MP3) and of glitchy dance rhythms on “IOE320” (MP3) make much of this record something to be reckoned with.

Not all of the album is post-punk angularity. “Jaguar S” could be a track off a late-1970s or early-1980s Robert Fripp album. And there is also a cover of the Stooges’ “I Wanna Be Your Dog.”

Get the full set at archive.org. Enko is the moniker employed by Enkolf Kitler, who was born in the Ukraine and currently lives in Moscow. Released on the excellent bp.bai-hua.org netlabel, whose impressively old-school website is worth a visit.