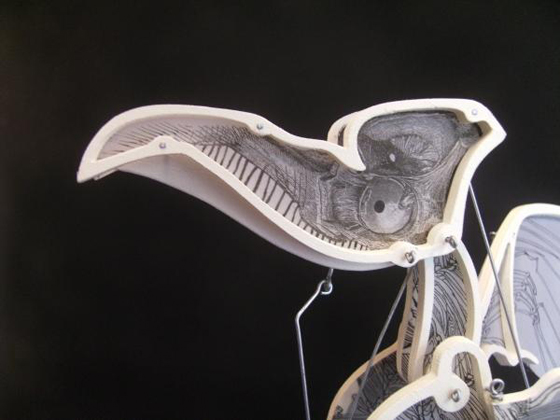 The ninth project in the Junto series was another “shared sample” project, though there were some variables at work. The musicians were given the same samples to work from, but they had a choice. Two choices, in fact. There were two guitar samples, both acoustic, though one employed a slide, and there were two bird-song samples.

The assignment was made late in the day on Thursday, March 1, with 11:59pm on the following Monday, March 5, as the deadline. View a search return for all the entries: disquiet0009-avian. As of this writing, there are 78 tracks associated with the tag.

Plan: The ninth Junto project is a shared-sample project, though participants have some choice in the source material. Each participant will produce a single track that combines a source recording of bird song and a source recording of acoustic guitar. Four samples are provided: two guitar, two bird song. You will select one of the two guitar samples and one of the two bird-song samples. You will employ only those two samples in the production of your track. You can do whatever you want with those two samples (process, contort, edit, etc.). The goal is to explore the very different origins of these sounds: one human, one avian.

These are the two options for the guitar sample:

These are the two options for the bird-song sample:

Title/Tag: When adding your track to the Disquiet Junto group on Soundcloud.com, please include the term “disquiet0009-avian”in the title of your track, and as a tag for your track.

The source material for this track was provided from these two samples:

[and then include the two appropriate freesound.org links]

The biggest surprise for me was that the slide guitar sample was far less popular among remixes than the other acoustic guitar sample. Someone at some stage commented along the lines that if they never again heard the latter chord progression it would be too soon, though many people re-used it to transformative effect, and as always slight variations were, to my ears, as illuminating as drastic ones. One possible reason the acoustic guitar was more popular was it provided a more clear contrast to the bird song than the slide guitar did.

One thing I learned was: have backups available of source material. The great freesound.org site was the location of the four samples, and it is not the most stable environment. It went down during the project, perhaps as a result of Junto participants’ downloading. Numerous Junto members answered the call to make the source tracks available, and in the end everyone benefited from the assistance of Larry Johnson, DJ_Kaboodle, Matt Kane, and Elst Pizarro

The image up top is a still of a kinetic sculpture by Keith Newstead (more info at keithnewsteadautomata.com). His work is tremendous, and I was unaware of it until Junto participant Schrödinger’s Dog employed an image from it as the “cover” to his entry in the ninth project: soundcloud.com/schrodingers-dog.