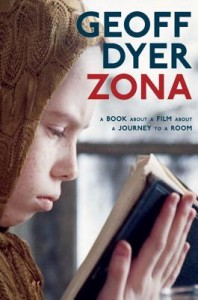 I recommend Geoff Dyer’s Zona: A Book about a Film about a Journey to a Room for anyone who’s seen the movie Stalker (a science-fiction road trip by director Andrei Tarkovsky that’s a modern classic of Russian film) and for anyone who wants a glimpse into the mind of a true cinephile.

By “true cinephile” I mean not an aficionado of film, but a habitué of the cinema as a physical place, someone for whom cinema-going is — and, more to the point, was — an essential part of the movie-consuming process.

The key thing that occurred to me as I read Dyer’s book about this fairly infrequently viewed movie is that there’s a clear and maudlin parallel between his concept of cinema and the facts of the world in which the film was made. Both were systems defined by a culture of significant deficits. The movie was released in 1979, during what we have come to understand as the waning years of Soviet communism, an economic engine that worked, when it did work, in fits and starts covered up by a veneer of bravado saber-rattling.

Dyer’s depiction of his core film-going years is one in which his viewing was defined not by what he wanted to see — the case in our Netflix-friendly, Tivo-enriched, BitTorrent-supported era — but by what was available. I think his depiction of how limits shaped cultural consumption is on par with what Jonathan Lethem accomplished in his recent 33 1/3 book on Talking Heads’ album Fear of Music. Lethem has a clear view of his past, but doesn’t wallow in it. Dyer’s evident nostalgia for that period is at times like that of Stalinists who miss standing in line for a loaf of bread — it is, more than anything, an act of willful disregard for modernity.

Dyer’s relative distaste — his adoption of the robe and role of the old fogey — for the world in which he finds himself isn’t just related to film. He evidences a professor emeritus’ generational cluelessness, for example when he riffs about how the index finger has less of a privileged role in our post-rotary-phone age. Clearly this is an individual with limited experience on a touch-screen device. (At the risk of venturing into the sort of first-person aside that is very much Dyer’s mode: I had a severe cut on my right index finger while I was reading a hardback copy Dyer’s book. I found that using my touchpad on my laptop and the screens of my phone, iPad, and iPod Touch to be an initially painful and, later, at best awkward experience, as bandaids impeded use, as did the wound’s scab as it formed.)

Beyond that, Zona is a book about obsessions, both Dyer’s for the film and Tarkovsky’s for the process of filming. The book is frustrating, because it feels like it was written fairly quickly, and benefited from limited acts of revision. Still, the full range of associations that Dyer draws within the film’s working parts and between the film and the world at at large is phenomenal. The personal asides have gotten the book a good amount of negative attention, but I think of them as an expression of how much the movie — how much movie-going — bleeds into Dyer’s sense of his own life. A lot of critiques of those personal asides neglect to note that they appear mostly as footnotes, not in the actual main body text of the book. Then again, those footnotes are often so long as to make it unclear on the page which one is reading: the main or the supporting text. At least in the hardcover book, there is no apparent distinction in how both are treated typographically. There is simply a thin line dividing them.

As I read the book, I came to think of that thin line as being not unlike the line in Stalker that divides the world from the Zone that is the initial destination of the title character and his traveling companions.

There are references to sound throughout — especially a certain “clang” that Dyer seems to feel is the movie’s intrinsic soundmark. I was a bit anxious about their potential absence from the narrative in advance of reading the book, because after scouring many reviews before reading Dyer’s actual text — taking a slow approach somewhat aligned with the film’s own vision of a journey: reading various writings about this book about a film about a journey to a room before reading the book itself — I found little mention of sound. The score to Stalker is by Edward Artemiev, one of the most essential electronic musicians in Russian history (I interviewed his son, Artemiy Artemiev, who runs the label Electroshock, back in 2003: “Shock the Bear”), and the music is an essential part of the movie’s structure and effect (I highly recommend listening to the track titled “Train,” embedded below). It’s quite likely that the “clang” that registers with Dyer is the railway noise that Artemiev folded into his richly layered, yet still often threadbare-ambient, score. I read Tatiana Yegorova’s book Edward Artemiev’s Musical Universe when it was first released, and I think I’m going to stalk it now for its Stalker material.