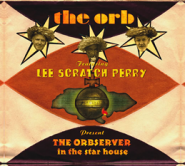 Time does interesting things to perceived generation gaps. Take the current collaboration between electronic figures the Orb and dub godfather Lee Scratch Perry. On the one hand, there is a gap of over two decades between them, and the team-up certainly suggests a heavy amount of reverence on the Orb’s part toward Perry — and deservingly so; it’s arguable that the pop-esoteric realms explored by the Orb wouldn’t have existed had Perry not played his part in the development of dub — that, to push dub for a moment less as genre and more as metaphor, music like that of the Orb exists as a distant reverberation of a previous music that took reverberation as its essence.

On the other, had a more youthful act taken Perry, born 1936 in Jamaica, on as a guest, the melding would likely not be as thorough as it appears on the first listen they’ve provided, a free download (available currently at theorb.com) titled “Hold Me Upsetter.” Here’s a full-length video:

The hosts may be the more youthful participants, but they’re in their mid-50s, and have quite their own history. Perry’s voice, in fine form, fits in well with the dank beats the Orb posit here. The track is a teaser for the full set, which has the resplendent title The Orb Featuring Lee Scratch Perry Present The Observer in the Star House, due out September 3. An full instrumental set is part of the release, and that is particularly welcome.

More on the Orb at theorb.com.