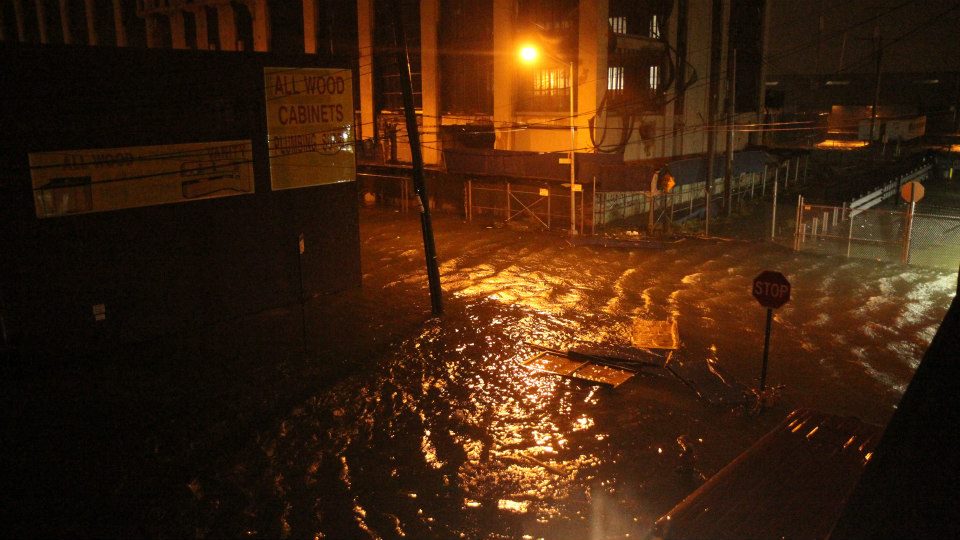 The storm we’ve come to call Sandy hit the East Coast of the United States last night, and this morning I found myself looking at photos of the Victoria Secrets lingerie model (and Transformers threequel actress) Rosie Huntington-Whiteley. This was because my anxious pre-dawn searches on Twitter for updates regarding my hometown of Huntington, Long Island, were apparently yielding nothing of particular value. I live in San Francisco, and Huntington felt very far away.

I’d come, the night prior, to lean on Twitter for Sandy news because that first-hand reportage —Â the photos and brief summary statements — had provided a superior sense of what was going on than did the professional news reporting, which seemed, appropriately, to be more about what was happening in the sky (forecast) and less about what was happening on the street (aftermath). Or, more to the point: Twitter was showing me what was happening in the lives of people I care about who happened to be posting on Twitter; it (along with Facebook) provided a glimpse of certainty in a haze of geographically diffuse generalities. But when it came to my family, which isn’t on Twitter, suddenly the metaphorical picture got fuzzy, news on Huntington proving to be difficult to come by in any specific and meaningful way. (As this morning has proceeded, more Huntington-specific material has begun to be prioritized on the Twitter; Sandy has, fortunately, pushed Rosie back to the dark side of the search return.)

And then I did what I do every morning, which was to fire up SoundCloud, and to listen to what’s in my queue. The latest Disquiet Junto project ended last night at 11:59pm, and there were almost two dozen tracks to check out. But something else, something more pressing, was in the listening queue, as well: sounds of last night’s storm. SoundCloud is currently, forgive the description, flooded with sounds of the storm, and they are informative in their own way. Photos and text provide a sense of what people choose to focus on, choose to document, while sound gives a sense of something beyond their control. A lot of this has to do with the nature of the medium: one takes a photo and writes text, generally speaking, after something occurs. But audio recording is more like video, in that you elect at some point to hit record, but you have no idea what is going to occur from that moment on — will a tree fall, a siren roar, or will nothing of note happen? And video still suggests the individual has elected to point the lens in a direction, while audio is less directed — you hit record, and wait.

Particularly harrowing is this low-fidelity recording of the wind in Harlem, posted by HarlemGal. Every time it kicks into high gear, there’s the sense that it might not let up, even when there’s the relief that it does:

Lefteri Koutsoulidakis posted an eerie bit recorded in Astoria, where the sound of the storm is framed by some sort of fritzy whir, like a flourescent bulb on overdrive:

Electronic musicians, needless to say, were among the posters. This is Devin Underwood (aka Specta Ciera) recording the wind from Cambridge, Massachusetts:

This is from the accomplished field-recording individual Michael Raphael, aka Sepulchra, outta Brooklyn:

And for an ongoing sense of the storm, check out the efforts of Manolo Espinosa, who is described as SoundCloud’s “Head of Audio … focused on spoken audio and sounds.” He has been maintaining a set of these Sandy field recordings:

(Photo up top of the Red Hook neighborhood of Brooklyn, New York, from the Facebook page of timeofdayfilms.com.)