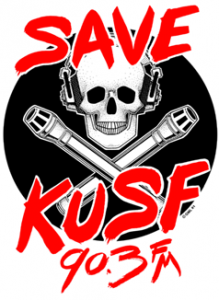 (Update: I learned on March 23, 2013, that the archived version of this broadcast had gone offline, so I uploaded it to my soundcloud.com/disquiet account.) Last night at midnight, the excellent radio show “The World of Wonder” aired on schedule at KUSF. A few things were different. To begin with, as has been the case for some time now, the show aired not at 90.3 FM but online, at savekusf.org, because of conflict between the station’s longtime volunteers and the university. For another, its co-host, Matt Davignon, had handed me the microphone, metaphorically speaking. I was to be guest DJ. (You can skip the rest of the following contextual information and just download my two-hour set here.)

“The World of Wonder” describes itself as follows:

“A wide range of unusual music, often bridging the gap between experimental and pop, with many points in between.”

I’ve been meaning to get into podcasting for some time now, so this provided a good test run. I was a DJ for many years on KDVS and, before that, on WYBC, and it was exciting to be back in it for a couple hours. Given that the show airs at midnight, I focused on quiet, and approached the set as a sequence of minimalist audio. Here’s how I introduce the broadcast after its opening chimes ring for 30 seconds:

The music in this two-hour episode will range amid various forms of minimalist sound. This will include drones as well as lightly augmented field recordings and low-key rhythmic play — there are associations throughout to contemporary classical, to noise music, and to ambient and ambient techno. All of the music is from the past three years, the majority from 2012. Several of the tracks originated in an online community called the Disquiet Junto that I founded at the start the very first week of 2012.

Here’s a downloadable stream of the set:

I want to thank Matt Davignon for inviting me to do the show. (The show’s other host is DJ Catsynth.) He is a intrepid explorer of the drum machine’s artistic potential, and one of the organizers of the Luggage Store Gallery Music Series, a long running weekly concert series here in San Francisco (the Luggage Store will host a Disquiet Junto concert on December 6).

More on KUSF in Exile at savekusf.org. Podcast archived at Davignon’s podomatic.com.