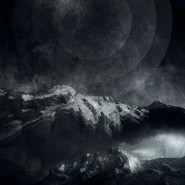 The track is propulsive in its beauty, but the propulsion is caught in decisively slow motion, just a rangy lope of a rhythm, like a thick metal bowl being spun slowly — or perhaps spun speedily and caught on film and played back at a more remote pace. The track is “A Pond Begging You to Leap,” and it’s credited to Celeste’s Fall, which is two people working in tandem: Sam Landry (leberger.org) and Pascal Savy (staticsound.net). There’s an intense underlying noise to the work, like the surface clatter of vinyl, or a rain outside a creaky studio, or the deep hum of an wire that refuses to be sufficiently grounded.

Let’s go with the latter option. While the track is romantic, with its held tones and pizzicato murmuring, it isn’t inherently nostalgic, which nixes the vinyl interpretation. Rain is a possibility, but there’s nothing necessarily moist about this sound; it could be the rush of precipitation, but more likely the snapping of fire. Yes, the burr of a hum seems electric in its intensity, a force entirely of potential energy occasionally showing the tips of its serrated fangs. What better metaphor for the underlying anxiety inherent in ambient music than the wire that won’t yield to grounding?

The track was posted for free download at Landry’s account soundcloud.com/leberger, and is part of the Sequence 5 compilation, available at futuresequence.bandcamp.com.