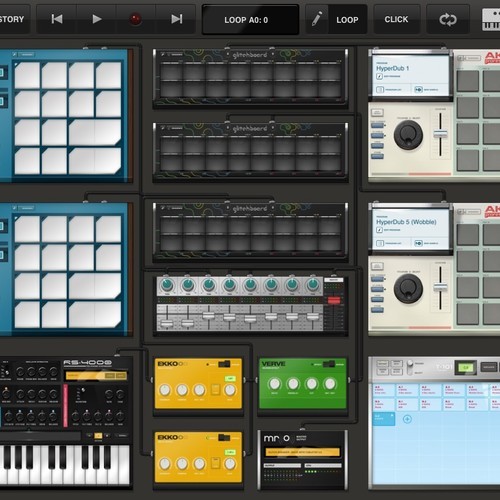 There are various ways to discern an individual’s presence in social media, key among them is the simple integer associated with the individual in a given network. Take SoundCloud.com for example, where Richard Devine has north of 55,000 of what we’ve become accustomed to call “followers.” His reputation as a tech clothes horse precedes “Glitch Breaker Demo,” a track he produced on the iOS app Tabletop, which is a kind of meta-app, containing assorted mini-apps that emulate various audio tools and instruments, from effects filters to drum machines to a simulated turntable. Devine’s track is IDM by way of EDM, a slowly raging deployment of the various tool at hand:

In related news, the iMPC — the iOS version of the classic Akai drum machine — is the first “Tabletop ready app,” which is to say it comes with a free unlocked version that appears within the Tabletop system. More on that at the Tabletop developer blog at retronyms.com. It’s pictured in the screenshot that accompanied Devine’s track, shown up top.

Track originally posted at soundcloud.com/richarddevine. More on Devine at richard-devine.com.

2 thoughts on “Running the Tabletop”