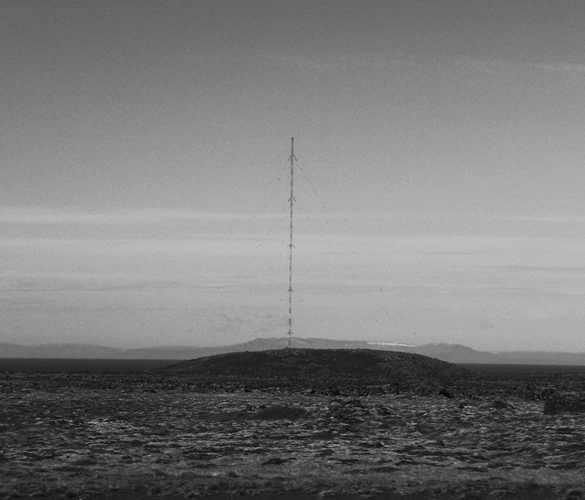 A running tally of favorites among the year’s daily Downstream entries thus far this year would certainly include the kalima feedback raga mentioned early last month, and also this transporting field recording from Iceland, documented by Aino Tytti and just posted at the Touch Radio website (MP3). Titled “Hellissandur Mast [GRD 7970],” it is a deep, quiet drone, the result of contact microphones capturing resonances, both physical reverberations and broadcast residue.

Here’s Tytti’s description of what it entails:

The remote Snaefellsness Peninsula in Iceland is home to the tallest structure in Western Europe. A transmitter built originally in 1963 as a long-range, low-frequency (LORAN-C) navigation system and now used for longwave public radio purposes.

During a recent sound recording trip to Iceland, i was fortunate enough to gain access to the transmitter facility and able to take a series of field recordings, using an array of contact microphones attached to the mast and supporting guy wires.

Several of these recordings were particularly arresting, capturing the structure as it radiated a myriad of constantly shifting harmonic progressions, in response to the hot Icelandic summer sun and strong icy winds blowing in from the nearby Snaefellsjökull glacier. These two extremes combined caused rapid expansions and contractions in the 200-700metre steel support wires and core mast, to produce a spiralling, ever-changing, kaleidoscopic drone.

Of particular note as well, during a quiet point in the recording, my microphones started to pick up the audio of the longwave radio transmission. A graceful violin solo for 3 minutes, before the sun broke through the clouds and caused the structural resonance of the mast to increase once more, drowning out the radio with a music of the structure’s own making.

Particularly beautiful is the notion that there is an ever-changing and constantly-in-flux sound emanating from this structure; an unbroken music, in direct response to its environment, which has been playing in constant form for the last 50 years. The sounds captured here represent a snapshot in time taken on the 15th June 2013, the specifics of which have never been, and will never be, repeated.