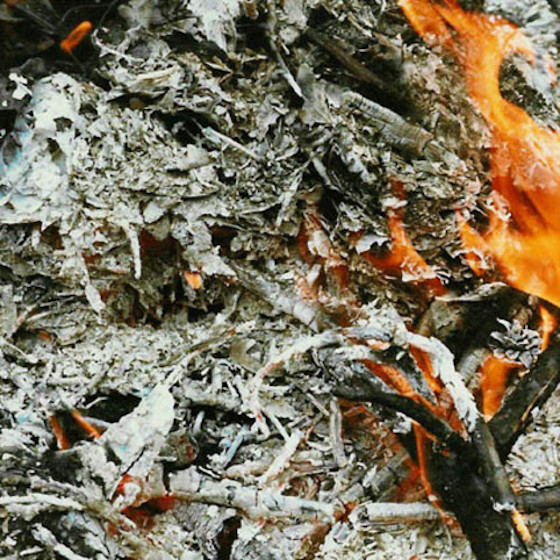 That is how Ernest Gonzales sums up his grief, and his way through grief: “Sound by fire.” He reports in the liner note to his new, 11:13-long piece “Cremation” that after the passing on a single day last month of his grandmother and of the man he describes as the closest thing he had to a grandfather, Gonzales took the electric guitar he received in fifth grade and ceremoniously burned it to ashes. The source audio of that destruction yielded this music.

“It was with this instrument that I learned how to make music. There’s a lot of sentimental value with that guitar … that’s what made it really difficult for me as I plugged it in and placed it on the fire. I recorded the electrical signal the guitar made as I cremated it. I recorded the ambient sounds of the fire and my backyard as well and then took all of it into Ableton for some final touches. … The song is 11 minutes and 13 seconds. 11/13 for the day both my grandparents left earth.”

The result is an extended rumination, like a bell struck once and left to ring on and on, a full-throated and yet world-weary drone that simultaneously signals sadness and fortitude. It’s a tuned thing, this drone. On first listen, it seems singular in its capacity for bleak, systemic, sonic consumption, but in fact the pitch varies as it proceeds, like a song too slow to recognize as a song.

Track originally posted for free download at soundcloud.com/exprecords. More from Gonzales at twitter.com/ernestgonzales and whileonsaturnsrings.wordpress.com. Gonzales, also known as Mexicans with Guns, earlier this year released the excellent Atonement album with Diego Bernal. Both men are based in San Antonio, Texas, where Bernal represents District 1 on the City Council. Here’s a stream of that Atonement record: