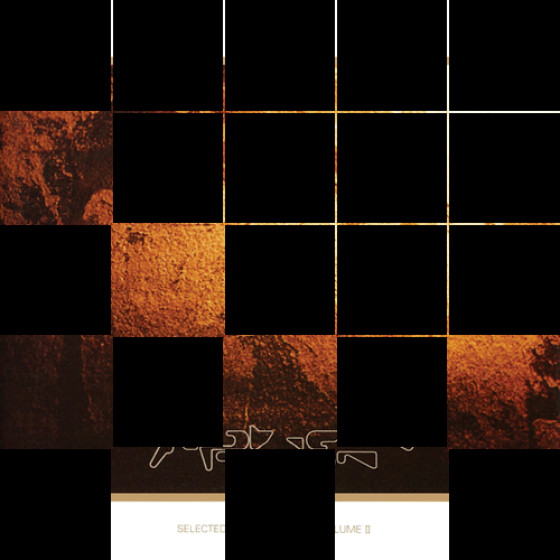 A slow swell over a metronome click. This is “Stone in Focus,” one of two Selected Ambient Works Volume II that are less than widely available, the other being “Hankie.” The whole track-listing thing gets complicated enough that I include a chart in the book, designed by Boon Design, same designer who handled the splendid 5×5 cover grid that accompanies these countdown entries. The metronome comes and goes, with a second hovering tone-as-melody making itself heard once the track is well underway. And that’s about it. It’s threadbare stuff, and all the more beautiful for its simplicity. That said, it makes up for in length what it lacks in density. At just over 10 minutes, “Stone in Focus” is longer than is any other track on the album save one, the penultimate “White Blur 2.” More than ten minutes of some waveforms and a click track — “Stone in Focus” is almost a punk of a bonus track, except again that it is so pleasing. It’s hard to think that someone’s pranking you when they’re helping you get to sleep.

By the way, while the track isn’t on the CD edition of Selected Ambient Works Volume II, that isn’t to say it wasn’t available in CD form. It appeared on a release from the Astralwerks label’s double album Ambience—The Third Dimension, released the same year. More on this, and its contribution to the humorous, murky consequences of the album’s title schema, in the book.

This is a cover, in which the metronome is more hinted at than present, and a melodic element, in the form of chords of chimes, is less ethereal than in the original. Still, it’s quite lovely:

Here it is slowed down: