Notes on my course on sound in the media landscape

I’ve been teaching my course on “sound in the media landscape” at the Academy of Art in San Francisco for three years now — four semesters straight since 2012Â — and I’m loving it.

It seems like just yesterday that my first day of lecturing was upon me and my many educator-friends were sending me encouragement. This semester has been especially enjoyable — not just because with each passing season there’s iterative improvement of the topics, but because this semester the specific subject that has in the past proved the most elusive is, quite suddenly, not really much of a problem for the students to comprehend. This came down to one tiny little change I made in the curriculum, and yet the impact on the students’ perception of the materials has been remarkable.

Pretty much every week I assign work that builds on that week’s lecture, and I assign work that looks forward to the next week. This latter pre-lecture, pre-discussion work preps them by getting them thinking about the ideas before I explore them more fully in class — ideas like “sound in product design,” or “the history of the jingle,” “the public voice” (largely about public address systems), and so forth.

Anyhow, the course spends a lot of time on the distincion between “explicit” and “implicit” sound — between that which is self-evidently part of a product, a service, an institution, and so forth, and that which is inherently part of the same subject yet isn’t as widely understood to be so. It’s the difference between foregrounded sound, branded sound, and background sound, tacit sound.

For example, the sound of Rice Krispies cereal is explicit (it’s referenced in the characters of Snap, Crackle, and Pop), while the sound of typing on the screen of an iPad is more implicit (the tablet is often described as being silent in contrast with traditional keyboards, even though typing on an iPad does make a sound). Likewise, the quality of audio on an MP3 player or phone is likely an explicit aspect (a selling point), while the sound of the headphone being plugged into the jack is more implicit (an everyday but largely ignored aspect). The spark, the static, of plugging a guitar cord into an amplifier is a more trenchant image than is the plugging in of a headphone into a phone.

I say “more implicit” because these these things are entirely relative — and because over time implicit sounds can become explicit when they become identified with the product, service, institution, and so forth. In some cases it is more general than a specific product; it’s about a category — the Harley Davidson engine sound is unique to that vehicle, while the concept of an electric car is synonymous with an idea of relative silence. These positions are relative. In the course we tend to work on them in the form of a standard grid of quadrants — not distinct buckets so much as relative positions, along these lines: 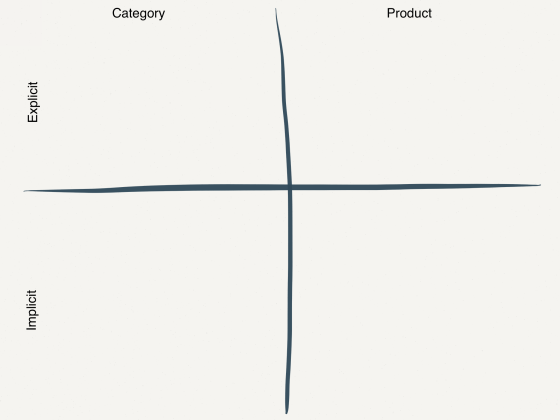 In the past, the pre-lecture homework on this explicit/implicit material yielded not so much more questions than answers, than it did as much confusion as curiosity. The whole distinction became so loaded down that explicit/implicit for some students became synonymous with confusion, and up through the last day of a given semester we’d still be discussing how it might be employed effectively. The material was still central to the class, and essential to the subjects at hand, and yet the discussion was muddied by this confusion. I’m not saying that every subject is class is uniformly comphrehended by the students — all of them seem to get “synesthesia” and “soundscape,” while not all have embraced “acoustemology” — but this explicit/implicit material is something this semester that I really wanted to work through more productively, and I gave a lot of thought to how to better present it.

And oddly, it took just a simple change to make progress in that regard. Because this aspect of the course is especially abstract, I simply didn’t assign much in the way of pre-lecture, pre-discussion homework about the distinctions between implicit and explicit sound. I introduced the ideas in class first, built on them in various class meetings, and then dedicated a working-session class — more discussion than lecture — to work through it all. That class meeting occurred yesterday, the ninth weekly meeting of the 15-week semester, and it went quite smoothly.