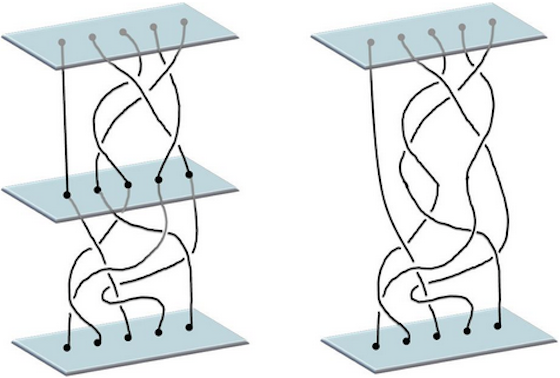 Planning the week’s Disquiet Junto made my head hurt, in a good way, like that time I played board games with drunk NSA contractors in New Orleans. This week is somewhat unusual: in place of the standard one project we have two interrelated projects (“0121a: Jigsaw Composition”; “0121b: Braid Abstractions”). You’re encouraged to do just one of them, though certainly feel free to try both — there is one that will take less time, and one for those who have more time to dedicate. We may again employ such a multi-project approach in the future.

Both this week’s projects draw from ideas explored in the book Love and Math: The Heart of Hidden Reality by UC Berkeley professor Edward Frenkel, with whom I spoke at the SETI Institute in Mountain View, California, on April 22, at the invitation of the SETI artist-in-residence, Charles Lindsay. In his book Love and Math, Frenkel quotes Henry David Thoreau, “We have heard about the poetry of mathematics, but very little of it has yet been sung.” This week we’ll help some small bit of Frenkel’s math to sing. Frenkel weighed in on the development of both this week’s Junto projects. I think we’ll see more projects come out of that SETI event in the future, likely drawing upon SETI data.

These projects were published in the late afternoon, California time, on Thursday, April 24, with 11:59pm on the following Monday, April 28, 2014, as the deadline.

Note that there are two project options this week: 0121a is a little more simple than 0121b.

Several times in his book Love and Math, the author Edward Frenkel uses the metaphor of a jigsaw puzzle to describe the process of solving a mathematical problem. As he writes, “It’s useful to think about mathematics as a whole as a giant jigsaw puzzle, in which no one knows what the final image is going to look like.” The following exercise explores that idea in sonic form. There are 4 steps:

Step 1: Choose a recent piece of your own music, and select a 20-second segment, preferably one with a fairly clear melodic component.

Step 3: Randomize each of those sets and for each set create a track of those segments playing in random order (with no repetition of a segment within a given set).

Step 4: Create a track constructed as followed: Set A followed by Set B followed by Set C followed by Set D followed by the original source segment. You shouldn’t add any sounds to the sequence, though you can fade in at the beginning of the complete track and fade out at the end. The finished work should be 1:40 in length. In this final resulting track, the listener should experience the finished piece slowly coming into sonic view.

This project has 5 steps. The project explores the subject of “braid groups” that Edward Frenkel writes about in his book Love and Math. Read through all these steps completely prior to undertaking them in sequence. Your choices in steps 1 and 2, for example, may be influenced by your understanding of the intended outcomes of steps 3, 4, and 5.

Step 1: Choose four distinct sounds. They should be soft and tonal in nature.

Step 2: Choose four different note values within a single octave. (In this project, working with closely proximate note values — such as microtones — is not recommended, but certainly try it out if you would like to.)

Step 3: Draw six different diagrams, each a variation on the following sample diagram provided at the end of this step. Each diagram consists of two plates and four threads. Each thread starts out at one point on a plate and ends at one point on the opposing plate. No single point on a plate ever has more than one thread connected to it. (A thread can, certainly, move from a point on one plate to the same point on the opposing plate.) The four threads represent the distinct sounds you have chosen (color-coding them may be helpful). The four points at the start and end plates represent the four different note values you have chosen. Here is the sample diagram showing three threads. Note that you’ll, of course, be employing four threads: http://goo.gl/NQYysE. 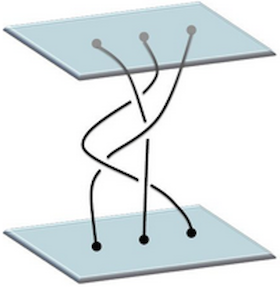 Step 5: Create a single track consisting of a randomly generated sequence of these segments (preferably with no consecutive repetition of a segment). You shouldn’t add any sounds to the sequence, though you can fade in at the beginning of the complete track and fade out at the end. The length of the track should be roughly between 45 seconds and a minute and a half.

Note: The image is sourced from Frenkel’s book, with his permission.

Title/Tag: When adding your track to the Disquiet Junto group on Soundcloud.com, please include the term “disquiet0121-frenkeljunto” in the title of your track, and as a tag for your track.

The “braid” image associated with this project is sourced from Edward Frenkel’s book Love and Math, with his permission. More on the book at: