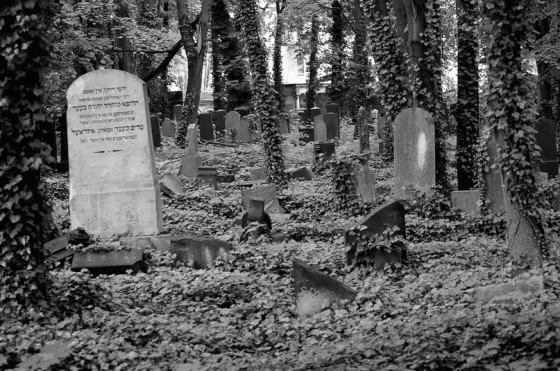 The Berlin-based musician Micah Frank has posted this nearly two-minute recording of the Schönhauser Allee Cemetery (or Friedhof Schönhauser Allee in German). The Jewish cemetery dates from 1827. Frank’s annotation is simple. He marks it as a stereo recording, and he lists what he hears. What’s especially of note in regard to what he hears is less the sonic objects he finds distinct within the soundscape, so much as how he categorizes those objects. Seemingly drawing from the work of Bernie Krause, the notes here divide the sonic content into three complementary fields:

The words are fairly self-explanatory. “Anthrophony” refers to sounds made by humans. “Biophony” refers to sounds made by any other living organisms. “Geophony” refers to the remaining elements of nature. What makes them useful, and worthy of greater adoption by people who post field recordings, is how they usefully break down the sounds in a way that gives them context, makes them comprehensible, knowable, memorable. One might take issue with the difference between “anthrophony” and “biophony,” suggesting it creates a false dichotomy, but given that the intended listener is a human, the focus on “anthrophony” helps give the listener the sense of a broader role in the sound of the world.

There are numerous field recordings on Frank’s SoundCloud page, including ones from Puerto Rico:

Sometimes Frank plays with the source audio, as in this modified recording of his father-in-law’s home distillery (“My field recorder,” he writes, “picked up all of the bubbling and percolations in great detail”):

Berlin track originally posted at soundcloud.com/micahfrank. More on the historic cemetery at jg-berlin.org. More from Frank at twitter.com/micahfrank.