Cori Marquis and Molly Sheridan on Dance, Music, and Video

An insightful conversation about the Disquiet Junto at NewMusicBox.org 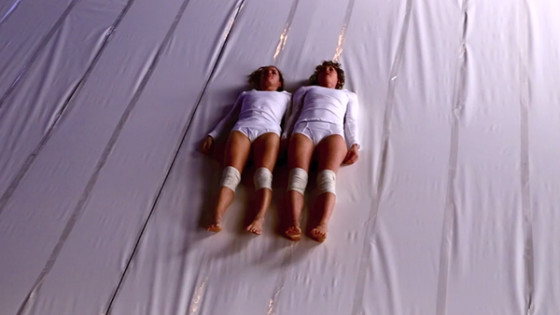 This week’s Disquiet Junto project, in which compositions are created to complement a video of new choreography, owes a debt to Aphex Twin. It was while researching the aftermarket uses — the cultural afterlife — of his album Selected Ambient Works Volume II for my book in the 33 1/3 series that I came upon Cori Marquis. Now a choreographer and dancer based in New York, she had, while an undergraduate at Stanford University, created a work based on music from the record — more to the point, her project was twice removed, since she had used music from the Alarm Will Sound album of Aphex Twin covers.

I learned a lot about contemporary dance while preparing to interview Marquis for my book, and learned even more when interviewing her, especially about how music is often secondary to the choreography. As an outsider to dance, I mistakenly assumed that dance is an expression of the music, when in fact the relation between dance and the music that is danced to is often quite complicated, even remote.

As this week’s project came into focus, I suspected that the insightful folks at NewMusicBox.org would be interested and indeed Molly Sheridan, the site’s Executive Editor, has published an excellent interview with Marquis about the relation between film and choreography, the relation between music and choreography, and her inspiration for this piece. The full article, “A Feedback Loop of Movement and Sound: Five Questions with Choreographer Cori Marquis,” is online at newmusicbox.org

This, for example, is Marquis on the attraction of film for choreographers:

“You can get the intimacy of film with the physicality of motion; you can alter the viewer’s visual perspective as well as the timing and pacing of the work. The editing becomes part of”“or maybe most of”“the choreography. You can bring site-specific work beyond the location. You can create physically unfeasible images. And logistically, it can be presented an infinite number of times, with the possibility of a huge geographical reach and scope in audience without the financial obstacles of touring a cast around the world.”

And this is her response for a request by Sheridan for a little more context for what’s happening in this piece of choreography:

“The idea for this dance film is rooted in the ephemeral nature of live performance, and specifically the transient way dancers trace and use space. I wanted to investigate what it is to record these floor patterns and points of contact so that they do not disappear the moment they occur. A clear vehicle for this became paint on bodies, with dance on film. The work uses multiple colors of paint to track two dancers: their points of contact with the floor, themselves, and each other; in athletic phrase work; partnering; and nuanced improvisation. The film primarily utilizes semi-aerial and intimate close-up shots.”

Read the full interview at newmusicbox.org.