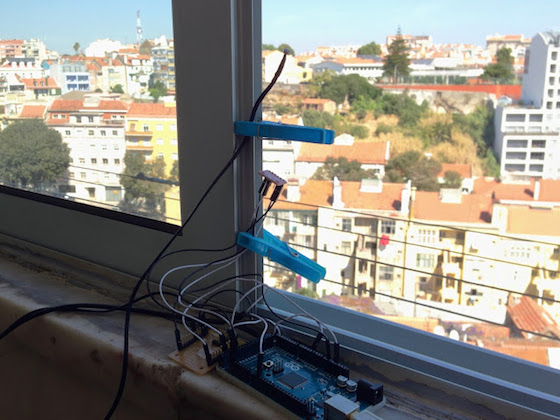 The audio is a race of everyday noise at what feels like hyperspeed. There are warbling sirens and clipped voices of public address systems or low-resolution audio surveillance, not to mention foremost this underlying bass drone. Played on a laptop’s speakers at mid- to high level of volume, it will vibrate your desk until your pens and spare change join in the quotidian cacophony. It all has this sense of speed because of the high pitch and the constant pervasive environmental presence.

As it turns out, that sense of presence is rooted in the source audio. The track, “Mere Pis: Lisbon” by Abinadi Meza, is a digital reflection of constant triggers from everyday life. As the brief project description explains:

“Mere Pis: Lisbon is an exploratory atmospherics project that was made in Lisbon, Portugal using custom-built sensors and software. The sensors recorded micro-local environmental elements such as ambient light, humidity, light frequencies, and temperature. Meza treated these sounds as residues, glitches, and afterimages – fragments of a city beyond the city. The project was presented as a live performance at the Sinel de Cordes Palace in Lisbon on September 19 and 21, 2013.”

The above image shows the sensors in question. More on the project at abinadimeza.blogspot.com. This recording was episode 55 of the excellent Radius podcast.

Track originally posted for free download at soundcloud.com/theradius. More details at theradius.us. Abinadi Meza is an American living in Rome, Italy. More from him at abinadimeza.blogspot.com and twitter.com/abinadi.