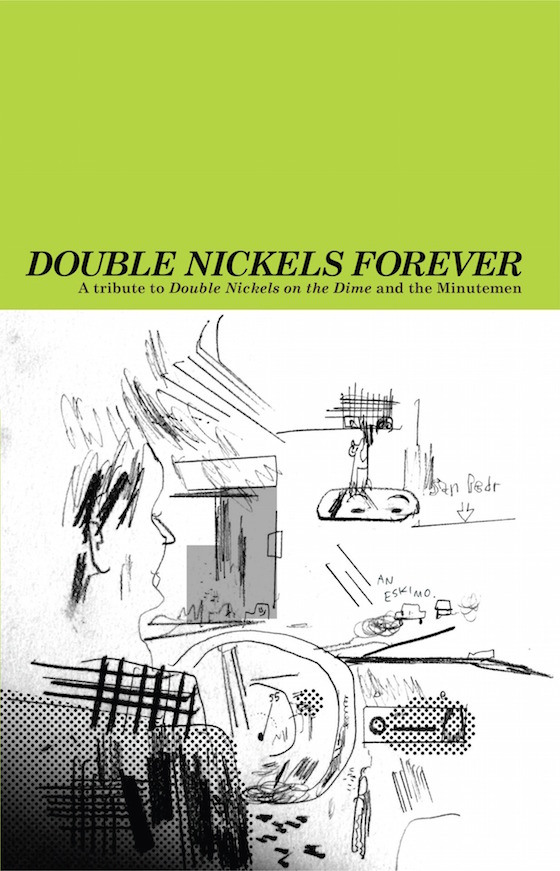 The talented artist Warren Craghead, whose comics I edited a million years ago, recently published a small book — “a drawn tribute” — in which 58 artists drew the 48 songs from the now 30-years-old album Double Nickels on the Dime by the Minutemen. The contributors included several other artists whose work I have edited in the past — among them Gabrielle Gamboa, John Porcellino, and Dean Westerfield — and such talented folks as Josh Bayer, Marc Bell, Luke Ramsey, and Sarah Boyts Yoder, just to name a few. Craghead invited me to write the collection’s introduction. I was tempted, of course, to connect mini-comics and self-published art to the “econo” mode of the Minutemen, but in the end I took another route, based more directly on my own experience of the music when it was first released. Here is the text of my introduction:

I never saw the Minutemen play live, but I did get to witness Mike Watt carry the flame in the years that immediately followed their tragic, premature dissolution.

I started college a few months after the album Double Nickels on the Dime was released. Double Nickels was something of a soundtrack to that first year of school. While the dormitory quad echoed with dueling boomboxes — there was an ongoing rivalry between recent live releases by Bruce Springsteen and Talking Heads — the college radio station was more partial to the Minutemen. Those taut, ever so brief songs that populate the album popped up regularly on the radio, like public service announcements: short, direct, impassioned. The title of the album’s “#1 Hit Song”might have been intended as a jokey self-defeatism, but on college radio it was something of a fact.

And then, well into the first semester of my second year at college, the Minutemen’s legendary singer and guitarist, D. Boon, passed away. I happened to attend school where Kira, of Black Flag, was originally from, and she’d recently returned to town. She and Watt, in the process of recuperating from losing Boon, formed a group called Dos, which as the name suggests consisted just of their two basses. Seeing Dos perform live off campus was the first time I ever saw Watt play in person. It was a very disorienting experience, because the rollicking, intense, chaotic sound that I recognized from the Minutemen was, in the form of Dos, funneled into something far more meditative and reflective, more subtle and remote. If the Minutemen were like funky beatnik Woody Guthries, Dos was as if Johann Sebastian Bach had hooked a pickup to a cello.

And to be frank, at barely 18 years of age, I had found Double Nickels on the Dime extremely befuddling at first. Like with many records that would later become favorites — Miles Davis’ Bitches Brew, Aphex Twin’s Selected Ambient Works Volume II — I was by no means immediately smitten. It was less love at first listen than it was an immersive, confounding experience that I felt a strong desire to wrestle with. Unlike with Brew or SAW2, the Minutemen’s Double Nickels on the Dime isn’t something I ever really managed to wrestle to the ground. Instead, I simply managed to come to grips with it, to make peace with its intensity. To this day the pummeling language, the short songs, the changes of sonic environment — live audience here, tiny garage there — all combine into a persistently formidable listen. We all make our way into a record this intense in our own ways. It was, really, only through the musical language of Dos that I came to begin to understand Double Nickels on the Dime, to appreciate the individual instrumental lines, to recognize the play between guitar and bass, bass and drum, and to hear Boon’s booming innuendos and admonishments as one among many rumbling forces in the fierce assembly.

Pick up a copy of the book at doublenickelsforever.tumblr.com.

This first appeared in the December 2, 2014, edition of the free Disquiet email newsletter: tinyletter.com/disquiet.