A friend recently (on Facebook) unearthed my top 10 favorite albums and singles from 1987. With the exception of the Tom Waits, the albums are all things I listen to quite regularly to this day — well, I don’t listen to The Joshua Tree much, but I have a special affection for “Bullet the Blue Sky,” with its epic, filmic quality, and for the version of “Sweetest Thing” that appeared on the B-side of the “Where the Streets Have No Name” 7″ (not the cleaned up, perfected version of “Sweetest Thing” that appeared on U2’s The Best of 1980-1990). The Metallica, Cecil Taylor, and Ray Anderson albums, in particular, are my favorites by those musicians. I still remember plucking the Anderson from the shelf at the college radio station, WYBC, where I had a jazz show, and falling for it immediately. 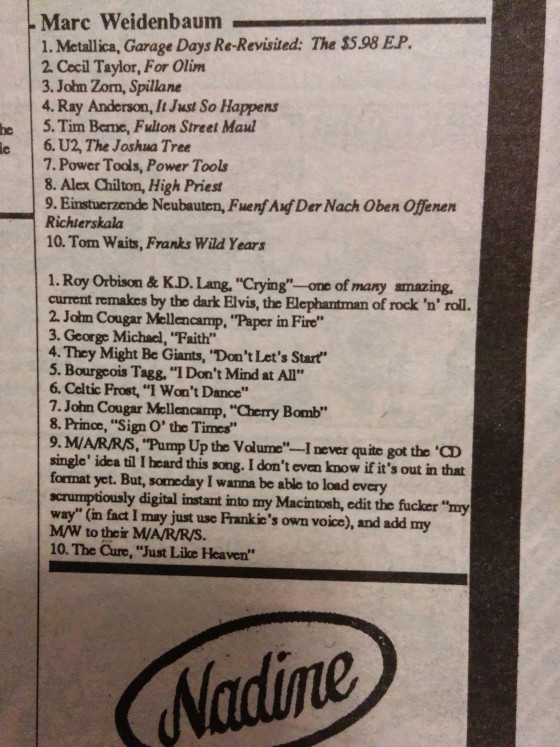 The singles are very pop, and I have come to realize, in retrospect, that my ear was focused on the music’s mechanical impulses, from the Devo-esque stop’n’start intensity of the They Might Be Giants, to the produced precision of the George Michael and the John Cougar Mellencamp. The Cure is one of the most misunderstood pop groups, often poorly characterized as a synth act. Its “Just Like Heaven” is by far the most live-sounding of the songs on this list, while the rest are quite clearly studio concoctions, in particular the Prince and Celtic Frost.

I’ve had this particular year’s top 10 in mind for awhile. This is in part because compiling a top 10 has become less and less interesting to me as the years have passed, and I look back at past lists wondering how much they were acts of necessity or of habit, rather than expressions of true prioritized interests. I look at the 1987 list and I know it was quite an accurate depiction of what I thought. I started many lists to summarize 2014 and only finished one, which I have yet to publish.

This 1987 list has also been on my mind because I’m especially keen on my sense, back in 1987, that the dense assemblage of M/A/R/R/S’ “Pump Up the Volume” was an invitation for others — for active listeners, as I’ve come to think of them — to join in the production process. The ridiculous bravado of my summary statement of the song is me trying out, I think, some of the rock-criticism writing I reading at the time. I hadn’t yet sorted out how to write like I want to write, and I was, so to speak, trying on other people’s clothes, awkwardly so. I was very sure, though, of what I wanted to listen to, and how I believed that music functioned, how it ticked. This list is reprinted from the February 1988 edition of Nadine, the student music publication where I attended college, Yale.

These are the albums:

And these are the singles: