An Arduino Fountain in “Plein Air”

There is a tremendous artist-in-residence program at Autodesk, the San Francisco Bay area software firm responsible for the tools used worldwide by architects and engineers. The artists in the residence program push those same tools past their intended uses. Several friends of mine have had residencies there, among them Paolo Salvagione. I have written many essays to accompany Paolo’s art work, the latest being this piece, “Plein Air,” which relates to a his “String Fountain,” show above, which uses an Arduino (a “physical computer”) that “controls the vertical and horizontal tilt and rotation using the two bilateral servos,” as described in a short feature by Filip Visnjic at creativeapplications.net. The image here is of the letterpress print of the essay, designed by Brian Scott of Boon Design boondesign.com and printed at the Aesthetic Union here in San Francisco. This shot is from Boon’s Instagram account. For you Pantone fetishists, the color is 3135U. 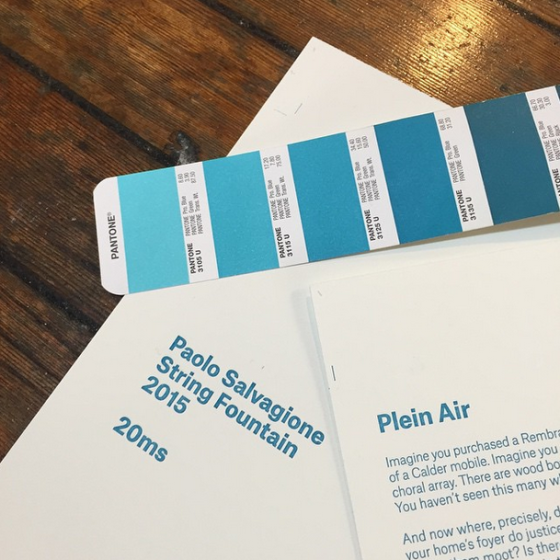 Tonight, January 22, there’s a group show by over 40 current and past Autodesk artists at the residency site, at Pier 9 in San Francisco. It’s from 5pm to 9pm.

There’s a full “instructable” of how to do it yourself. Here’s a short video of the work:

Imagine you purchased a Rembrandt painting. Imagine you came into possession of a Calder mobile. Imagine you now own a Cardiff, specifically her multi-speaker choral array. There are wood boxes on your doorstep and insurance forms to sign. You haven’t seen this many white gloves since your high school prom.

And now where, precisely, do you install these works of art? Does the light in your home’s foyer do justice to Rembrandt’s shadows, or does the midday sun render them moot? Is there any breeze in your den, or does the colorful kinetic sculpture simply hang in the air, decidedly immobile? Do you even have space for the speakers, three dozen plus, anywhere other than your garage, and if so do you henceforth feel at a loss pumping Tallis through your automobile’s mere 5.1 system when you’re on the road?

A work of art may hang singularly on a wall — descend from the ceiling, center an otherwise empty room — in a manner that suggests it as a standalone object. A work of art may come pre-packaged as a sui generis subject of hermetic contemplation.

But no art is an island. All art is part of a bigger picture. All art arrives with its own baggage, and accumulates additional baggage as the years progress — artist’s statement, initial cultural context, socio-economic footprints of provenance documentation, exhibit text, installation requirements, six degrees of curatorial association, revisionist history, originalist history, metaphors.

There is, foremost, the effort to get the art into that white space: the paperwork, the lighting, the guest list, the empty wine bottles, the installation process itself. The longer the work survives, the further it tours, the more widely it is seen — thus the more detailed is its preparatory documentation.

One marvel of “String Fountain” is that it contains its own context. Its physicality compels attention, no matter the lighting. Its tiny, computer-controlled engine maintains its ideal active state. Its dimensions command the space in which it is appropriately contained. “String Fountain”is not merely a grounded kinetic sculpture. It is a mobile that comes complete with its own optimal artificial weather system.

More on the event at facebook.com. More from Paolo Salvagione at salvagione.com.