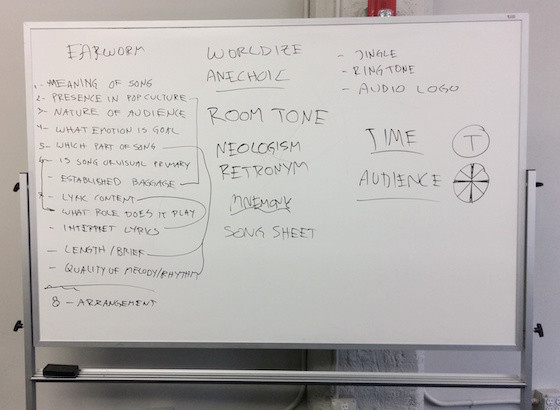 The “jingle” is the subject of the fourth week of the course I teach on the role of sound in the media landscape at the Academy of Art in San Francisco. After three weeks spent studying listening, the fourth week is the start of the second arc of the course: “sounds of brands.” This second arc is the longest of the course’s three arcs, and runs through week 10. Each week of the 15-week course my plan is to summarize the previous class session here. Please keep in mind that three hours of lecture and discussion is roughly 25,000 words; this summary is just an outline, in this case less than 10 percent of what occurs in class.

As with the previous two weeks, the structure of this lecture is based around a timeline of sorts. For class meeting two it is “the history of listening,” and for class meeting three (last week) it is “a trajectory of the use of sound in film and (later) television.” This week it is a rough outline of “the history of the jingle.” The outline reads as follows. This is less a timeline than a sequence of talking points in rough chronological order:

”¢”¢ the development of the jingle

We start with the definition of the “jingle,” which originates in the 14th century to mean “of imitative origin,” in Dutch and German. In time this comes to be a verb, and to expand in the mid-1600s to be a “catchy array of words in prose or verse.” Its employment as a “song in an advertisement” dates from around 1930, fairly recently. But if the usage is recent, the role of the jingle is not.

”¢ from the Moroccan market to newsboys

We start with the purpose and benefit of the jingle. As early as there were marketplaces there was the need for a product to distinguish itself, for a caller to attract consumers, to get them to visit one stall rather than another. That practice continues to this day in some markets, and had something of a heyday in modern times with the “newsboy,” who could announce bits of the headlines but still make purchase of the paper requisite for getting the full story.

There’s a received assumption that connects the jingle specifically to a commercial song, a ditty written to sell a product. I talk a bit about popular singers who got their start as jingle writers. But as the word’s definition explains, the “catchy” verse preceded what we have come to think of as a full song — which isn’t to say we had to wait until the rise of radio and recorded music for the jingle to be a proper song. One artifact of interest is the advertising or promotional “song sheet,” as documented by Elizabeth C. Axford and by Timothy D. Taylor, among others. The song sheet, in its day, was a promotional song given as a small gift to consumers, for example when they visited a Studebaker dealership to test-drive a vehicle. The genius, in retrospect, of the song sheet was that it meant people would then return to their homes and played the advertiser’s jingle themselves on the family’s parlor piano. Talk about “viral.” The practice makes the Max Headroom “blipvert” seem like a brute force attack by comparison.

These popular roadside signs (e.g., “Don’t pass cars / on curve or hill / If the cops don’t get you / morticians will / Burma Shave”) didn’t kick in until well into the 20th century, but they serve as a good example of a modern jingle that isn’t truly a song, and also how a jingle can be crafted to suit its environment. The question that lingers over this class meeting is: “What is the Burma Shave of the Internet?”

The odd detour I mention early on is how at first radio was not a matter of interstitial advertising, as we experience it today, but of sponsored hours. To that end, for many years early in radio one had a positive association with an advertiser because their name was affixed to a regular weekly variety show. Only later on did radio stations stop selling “time” and start selling “audience.” The jingle as we know it may have its roots in the markets of yore, but it only really took shape once brands needed to make the most of a half minute or so of advertising, after the hour-long sponsorship had faded. We may not have solved the riddle that is the “Burma Shave of the Internet,” but we can draw a fairly straight line from the Texaco radio hour, and its ilk, to to modern-day resurgences of the practice, such as “branded playlists” on Spotify.

For this week’s class, the students’ homework included a research and analysis project. The assignment read in part: “Identify a single song that’s been used more than once (three times at least) in different settings to promote different products/services from different companies. Explain the role that the song plays in the varied executions, and how it’s employed differently in each setting.” In class I break them into small groups, of three or four students each, and they compare what they learned in their research. The goal for each group is to develop a list of best practices they agree upon for employing a pre-existing song to represent an organization, brand, or service. We then collate these best practices again when the whole class reconvenes to sort out what the individual groups decided.

I usually show a few archaic commercials at this point. We already marveled at some Kit Kat candy commercials in recent weeks. We now watch an animated Chiquita TV commercial that explains how you don’t refrigerate bananas, and compare it with how, say, early iPod commercials had to teach the viewer how to use the (then) new touch interface. We also watch an early Brycreem commercial, and I investigate how the melody is quite expertly insinuated into the narrative before it appears explicitly as a jingle. The close reading of the Brylcreem requires several repeat viewings and a lot of pausing, as we did the week prior with a scene from the David Fincher version of Girl with the Dragon Tattoo.

For the next week they have three assignments. They are to write in their sound journals, as always four times in the given week. They are to read an interview with former KCRW DJ Nic Harcourt, to learn about the role of the music supervisor. And they are to watch Jacques Tati’s 1967 film Playtime and write about the role of sound in its narrative. I warn them that if they found The Conversation, which we watched for homework two weeks prior, to be a little slow, that Playtime is about half its speed.

This first appeared in the February 24, 2015, edition of the free Disquiet email newsletter: tinyletter.com/disquiet.