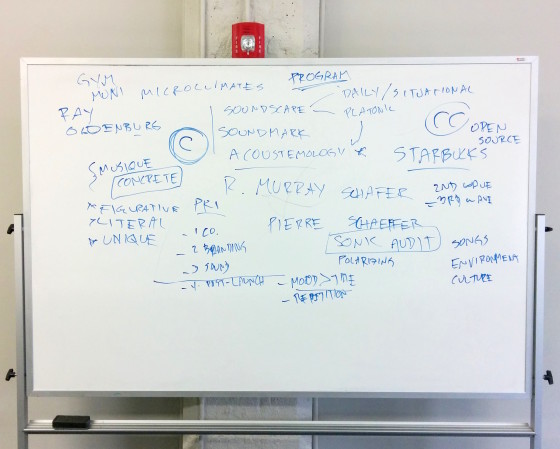 I was once eating dinner at a Japanese restaurant that was, truly, a mom and pop operation. Pop was in the back, preparing the food, and Mom was the sole waiter. There were no other evident employees, not even a dishwasher. Between the two of them they managed the tiny space, which had maybe six small tables in it. The mood was relaxed, the room quiet, the diners committed to an unwritten agreement to keep their conversations private. A light bit of music could be heard at a low volume, tasteful bits of ancient French pop songs, elegant pre-fusion jazz, and atmospheric cues from post-orchestral movie soundtracks. Nothing in the evening’s music sounded Japanese in origin, nor did it sound out of place. I asked Mom what we were listening to. She signaled that she would let me know soon, but that she was busy with all the tables. Later in the meal she appeared at my side and handed me, without comment, a thin, flimsy square of paper. A pink sleeve, it was the envelope that contained the CD we were all hearing. I turned the square around in my hands and read the cover text. It was a music sampler CD from a large chain of retail clothing stores.

It is generally understood that music can change the mood of a place. What became clear to me that evening was that a place can influence the appreciation of music. The role of sound in public commercial settings is a symbiotic one.

The sonic capacity of retail space is the subject of week 6 of the 15-week course that I teach on the role of sound in the media landscape at the Academy of Art in San Francisco. After three weeks spent studying listening, we then spend seven weeks on the second arc of the course: “sounds of brands.”(A third and final arc, “brands of sounds,”begins week 11.) After spending week 4 on the history of the jingle and week 5 on the role of sound in product design, we proceed to “retail space.”Each week of the 15-week course my plan is to summarize the previous class session here. Please keep in mind that three hours of lecture and discussion is roughly 25,000 words; this summary is just an outline, in this case less than 10 percent of what occurs in class.

We begin week 6 by revisiting the previous week’s class, and related recent vocabulary. We talk about how the terms “soundscape” and “soundmark” and “acoustemology” inform our understanding of sound in product design. While R. Murray Schafer did not develop the first two terms with product design in mind, a consideration of the use case for a given product certainly would include its sonic context, and in turn the sounds directly associated with, unique to, a given product would certainly constitute its soundmarks, akin therefore not only to “landmark” but to “trademark.” I talk a bit more about Schafer’s work in acoustic ecology, and while correcting my accidental misspelling of his family name I connect him to his near-namesake, Pierre Schaeffer, who developed musique concrÃ¨te. If Schafer wanted to preserve the sounds around us, then Schaeffer wanted to make something new of them: music constructed from everyday and other pre-recorded sound.

In part I revisit these terms from the week prior to reinforce them, but also to reference how we first discuss philosophical matters before proceeding to practical ones. Only after talking about soundscapes do we talk about how Audi uses an anechoic chamber to construct sounds for its electric cars, and how Harley-Davidson failed in its attempt to register a trademark of its motorcycle engine noise.

This week only after the introduction of new terminology will we proceed to how coffee shops and clothiers use music to construct their environments, and connect to consumers. This week we talk about “the third place,” the phrase developed by Ray Oldenburg to describe the place that is neither the first place, home, or the second place, work. As Oldenburg writes, the third place is one “in which people relax in good company and do so on a regular basis. Some have coffee there before work. Some have a beer there after work. … Some drop by whenever it’s convenient.” I am quoting from Oldenburg’s introduction to Celebrating the Third Place: Inspiring Stories About the “Great Good Places” at the Heart of Our Communities, a collection he edited. Using his theories as a starting point, I make his connection to Tocqueville sense of Americans’ “habit of association.”

We work through the idea of the third place, discussing as a group examples, and probing outlying cases. If a cafe and a barbershop and bar are classic third places, what then of a gym, or a place of worship, or a sports arena? What of public transportation? Most semesters someone asks about online spaces, like message boards and the comments of favorite websites and email discussion lists.

And only then do we move from generalities to specifics, from theory to application. I walk through a variety of examples, discussing first a major coffee retailer, and how its CEO emphasizes the role of third place in his development of the ubiquitous chain. I talk about the various ways in which the chain reverse-outsources its environment, letting you bring home, after purchase, not only its coffee beans, but the cups it serves coffee in, and how somewhat inevitably, after paying a lot of attention to the music in its stores, the company got into the music business. Just this month this chain announced it was going to stop selling CDs in its stores, but that is not a reflection of its attention to music, just of the marketplace for physical recordings. We dissect a coffee-shop television commercial, how the music and everyday sounds combine to make a certain impression. We then continue on through examples of music in retail spaces, and from the samplers of franchises to the online listening stations of clothing stores, an idea that connects back to the first week of this arc of the class, about how today’s branded playlists on streaming-music services nod to the sponsored radio hours of a century ago.

And since we didn’t have the time last week, we talk about the Jacques Tati movie Playtime. While it was assigned in advance of a class meeting on the role of sound in product design, it just as well serves the purpose of discussion of the role of music, and more broadly sound, in public spaces.

We have recently completed one “sonic audit” project and are about to embark on another one, and so we talk through the components of an audit, how one can thoroughly extract from a given subject the way sound plays a role in it. For a given retailer, what songs are associated with it, what is the sonic nature of its physical environment, how is it, perhaps, itself the subject of musical cultural references, such as song lyrics? These and other lines of inquiry comprise the sonic audit of a given subject. (Also, I’ve been myself recently working on a public-space project related to music. It’s not quite ready for me to talk about here, but I hope to soon. In class I discuss in some detail how the project came to be, and how music is being employed to reinforce the public space that it is filling.)

I revisit the quadrants we discussed last week, the ones in which we have “explicit” and “implicit” along one axis and “product” and “category” along the perpendicular axis. That means of coordinating sonic matters, of placing them in relative positions, will inform their new homework assignments. We’ll be discussing these quadrants in detail next week.

They will continue their sound journals, in which they write four times a week. And they will do the first of a two-part project, titled “Sonic Audit.” The instructions are as follows: The first part is to do a “sonic audit”of a specific brand/product of your choosing.

Next week: the explicit and the implicit.

This first appeared in the March 10, 2015, edition of the free Disquiet “This Week in Sound”email newsletter: tinyletter.com/disquiet.